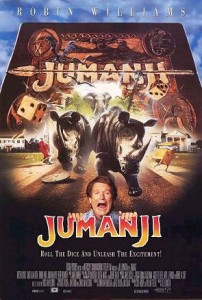 Bad Teacher director Jake Kasdan has joined the remake of family classic Jumanji, ahead of its December 2016 release.

According to THR, the son of Force Awakens writer Lawrence Kasdan has agreed to helm the reimagining of the 1995 original which starred the late Robin Williams.

However, Kasdan is faced with his biggest task yet, as Columbia Pictures has scheduled the blockbuster for a Christmas Day 2016 release – despite the fact that cameras haven’t even started rolling yet, and they just found a director.

The script has been penned by a pair of hugely experienced screenwriters in the form of Scott Rosenberg (Con Air, Spider-Man) and Jeff Pinker (Lost, The Amazing Spider-Man 2).

Not much is known about the remake, other than it will be a new adaptation of author Chris Van Allsburg’s critically acclaimed adventure book.

The story centers around a magical and powerful board game which can conjure wild animals and other jungle related dangers. The original movie, which was directed by Joe Johnston (Captain America: The First Avenger), was a commercial smash, grossing $262.8 million from a $65 million outlay.

Of course, that project was helped massively by the huge talent and appeal of its lead star Robin Williams, who sadly took his own life in 2014.

There is still no news on casting for the Jumanji remake – although with a script and a director in place, and its release almost exactly 11 months away, we expect things to start moving quickly.