It’s been awhile since we offered up a thrilling chapter in “Kickstarter Campaigns we love,” and this time around, I came across a cool alternative to a monopod that could be the best way to shoot out in the field, without being burdened by extra gear. And it gives “shooting from the hip” a whole new meaning.

Tripods on the go weigh you down. The stability and at the readiness doesn’t have to be from the clunky and immobile tripod. The solution is an effected and light weight stabilizer for on the go people. Meet Steadify. – Steadify Kickstarter campaign 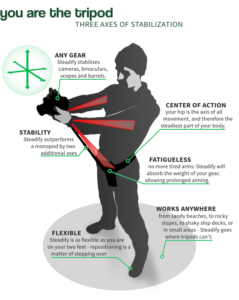 The device is called the Steadify, and it’s a waist mounted monopod that promises superior stabilization for shooting video on and stills out in the field, at weddings, or anywhere else you find you have to lug around extra gear. Now sure, the idea has been tried before. But I kinda like the way it’s designed. It’s almost as if the creator took a selfy stick, made a basic prototype and saw the possibilities.

The Steadify was created for the hunting industry, giving hunters a waist mounted pole to rest their rifles on in order to take aim with better stabilization. Now, regardless of how you feel about hunting, you can quickly see how easy it would be to move Steadify over to the shooting video or even stills for a one man crew. And kudos to the creators for choosing a more “lively” application.

Steadify can also be used for:

Steadify is designed for quick setup to capture that Kodak moment, total mobility, and smooth pans, tilts, and even slider movements. Using your body as the lower end of a tripod, you attach your camera to the belt mounted monopod and with that extra point of contact, the camera goes wherever you go. And you don’t have to worry about unsteady ground or taking time to adjust three legs to get a level shot.

The Steadify is in the Kickstarter phase, and you can pick up a basic model starting at $99, which comes with a v shaped universal mount to hold a camera by the lens itself.  I’m not sure if that’s a bit high or not, but if it’s well built, and it appears it is, then it’s not a bad thing to take a risk on. Spend another $30 and it comes with a bullhead, ARCA quick release plate, and pocket clip. They’re also planning a smartphone adapter, which may make this an ideal product for mobile filmmaking.

Estimated delivery is this October, but consider it Kickstarter time. Or, if you don’t want to wait, you can get the basic hunting version at B&H now for $129. For more details, check out their Kickstarter page here.

The SquidRig Interview Tripod is Quite Literally Handy

Being an admitted victim of gear acquisition syndrome (G.A.S.), I am always on the look out for new gear that can make shooting as a one man crew a lot easier. After all, it’s my […]

HOOP Is Not Only a Ring Light, But A Stabilizer For Your Camera

It’s been a long time since we did a chapter of the “Kickstarter projects we love” series, and when I came across the Hoop camera ring light and stabilizer, it answered a question I have […]

Kickstarter Projects We Love: SwitchPod Could Be the Perfect Tripod for Vloggers

If you ask Casey Neistat, the best vlogging accessory for your youtube videos is the Gorillapod (or as he likes to call it, the “Bendy Tripod”). But that doesn’t mean it’s perfect. In fact, Neistat […]