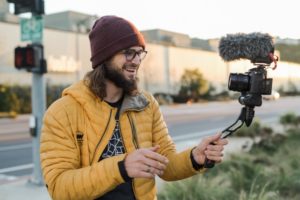 If you ask Casey Neistat, the best vlogging accessory for your youtube videos is the Gorillapod (or as he likes to call it, the “Bendy Tripod”). But that doesn’t mean it’s perfect. In fact, Neistat has a wall filled with cameras that have broken after he’s set the GPod down to do a scene in tripod mode, and it almost always tips over and cracks his DSLR in the process. But with a new product called the SwitchPod, that kind of pain can be in the past. And it could be the once and future king for Vlogging handheld.

So this is the Switchpod. Which means, I’m never using my Gorillapod ever again.” – Levi Allen VanderKwaak

Teaming up with inventor Caleb Wojcik, vlogger Pat Flynn knew there had to be a better way to grab that first person video blogging footage than the GorillaPod. You can see on their Kickstarter page linked below, that they worked with a 3D modeling program to get the right design, and likely tested it out with 3D prints first. But once they had a final design, they went straight to aircraft aluminum to get a design that is both light and sturdy.

The only true advantage of the Gorilla Pod is that its adjustable ball leg design enables vloggers to get some distance between the camera and their face, so that the image looks more cinematic and less claustrophobic. The problem with the Gorilla Pod is, however, that when you set it down, the pod’s biggest strength of adjustable legs suddenly becomes its weakness, in that the camera almost always tips over.

The SwitchPod was designed to fix that. With a 1/4-20 attachment screw and oversized tightening knob, that makes it easy to install onto your DSLR or mirrorless camera. With a  carrying capacity of up to 100 pounds, the Switchpod is great for DSLRs, Mirrorless cameras, pocket cameras, plus your microphone or video lights. But with that kind of weight, you could also go handheld with a Canon Cinema EOS camera or RED as well (not that you’d want to, they’re heavy). 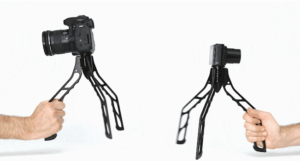 The SwitchPod has three, springloaded retractable legs that can instantly transition from being a sturdy handle, to a three leg tripod with a simple flick of the wrist. Magnets keep the legs held together in handle mode, but when you give the SwitchPod a gentle flick, the three legs spread out and turn it into a sturdy tripod.  There’s also three tiny, non slip rubber feet on the end of the handle so that the SwitchPod won’t slide off an uneven surface. The legs also have slots designed into them to keep the unit light, but also so you can use a carabiner to attach it to a bag or backpack.

Meanwhile, in handle mode, there are finger grooves that make it very comfortable to hold, even if you have to choke up to get a better grip. Moreover, in that configuration, the SwitchPod takes up far less space as a GorillaPod in your hand –  only about as thick as an SD card. 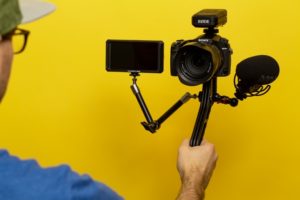 Normally, that would be a great design as is, but Flynn and Wojcik went a step further by adding a pair of 1/4-20 holes in each leg, so you can attach magic arms. This gives users the option of adding video lights, a SmallHD style monitor, off camera microphones, or even an audio recorder. It’s brilliant.  Users can also add their own ball head or quick release plates if that’s the way they like to roll.

The SwitchPod will retail for $99 when it launches in August, but you can get in on the ground floor for $69 through Kickstarter right now. This is definitely of those “Kickstarter Projects we love!”

By James DeRuvo (doddleNEWS) Now that Nikon has made the D850 official, everyone has been raving about this jack of all trades prosumer grade DSLR. And rightfully so as it may just be the best new workhorse […]