My goal in this article is to discuss the challenges in converting frame rates. If everything you shoot, edit and output is a single frame rate, then don’t change anything. This is the ideal way to work. However, as you start to integrate elements that originate at different frame rates, frame rate conversion rears its very ugly head.

Think of a video clip as a series of wooden children’s blocks connected by a piece of string. Each block represents a frame of video. As we pull the string, tugging the blocks along in a line, the frame “rate” represents the number of blocks (or images or frames) that pass an observer each second. Frame rate is measured in frames per second; “fps.” 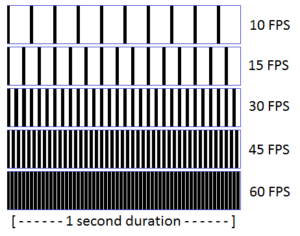 Changing the speed of a clip is NOT the same as changing the frame rate.

This difference is significant. The first is easy, the second is hard.

There are two sides to a frame rate discussion:

Converting to a 24 fps frame rate will NOT make your movie look “filmic.” It will, generally, just make it look worse. The “cinematic look” is a combination of: lenses, lighting, depth of field, shutter speed, shutter angle, motion blur and frame rate. Changing the frame rate only affects the frame rate, not the look.

There are no right answers, just louder voices.

Also, to keep this article to a manageable length, I will ignore:

These special cases don’t alter the basic rules of frame rates, though they can complicate understanding.

Whether you use Adobe, Apple, Avid, or any other video editing software on Macs, PCs or mobile devices, the basic rules of frame rates remain the same:

Read the rest at LarryJordan.com

In our last lesson, in our look at learning DaVinci Resolve, talked about working with Windows, and how you can use them to isolate parts of your shot. In this lesson, I want to move […]

by Larry Jordan  I was watching some TV promos this morning where a camera was moving around a series of images displayed on a wall. And I said to myself, Motion can create that. Here’s how […]

Larry Jordan: IMPORTANT! How To Record Audio in macOS Mojave

by Larry Jordan In macOS Mojave (10.14.x), Apple made a big change to how software processes audio. If you don’t pay attention, you won’t be able to record audio in your applications. If you are […]