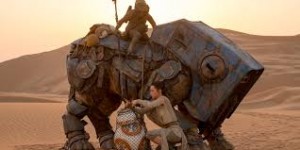 He said: “These movies will all be so different, Rian Johnson is a friend of mine — he’s going to make some weird thing. If you’ve seen Rian’s work, you know it’s not going be like anything that’s ever been in Star Wars.

“You couldn’t have three more different people than J.J., Rian and Colin (Trevorrow, who is helming Episode IX).”

The Force Awakens has is breaking all kinds of box office records, and became the fastest motion picture to hit $1 billion worldwide, and sits at $600,949,526 in North America (as of this writing, but it will certainly be higher soon). In addition to soon beating Titanic, Jurassic World, and The Avengers, Avatar’s record domestic haul of just under $750 million could soon fall.

Indeed, while Abrams essentially recreated the magic of the classic 1977 film – Looper helmer Johnson is a true visionary, and has clearly been tasked with creating something unique and special for Star Wars: Episode VIII.

Kasdan also spoke about the anthology films, which will include Gareth Edwards’ Rogue One on December 16, 2016 and a Han Solo prequel in 2018, which will be directed by The LEGO Movie duo Phil Lord and Chris Miller.

He said: “Those movies will have the Star Wars saga as their basis, but everything else will be different. Then Phil Lord and Chris Miller are going to make the Han Solo film and I can’t guess what that will be like — and I’m writing it.”