In a stunning reversal, Lexar has opted to abandon its planned return to XQD media card production and instead, focus on the faster, and more forward thinking CFExpress media format for high performance media cards. With Nikon and now Panasonic relying on the venerable format, what does the future hold?

“While Lexar is eager to pursue the XQD technology, the product availability of XQD has been held up by multiple parties, including Sony (who owns the IP) which is preventing us from moving forward. In addition, we are diligently working on the future standard of CFexpress through our efforts in the Compact Flash Association and partnerships with key camera manufacturers.” – Lexar email to Nikon Rumors

The news came from Nikon Rumors, which cited a direct email from a Lexar Spokesman, so I think we can consider this news, and not merely a rumor from the site. The email seems to imply that Sony is dragging its feet on approving a license to the XQD IP that they own, and Lexar says it’s preventing them from “moving forward.” What can that particular two work clue mean?

Considering Sony’s obsession with proprietary technologies, the company is simply making it difficult for Lexar to get back into the XQD game. Since the original Lexar closed its doors the first time, Sony was largely the only 1st tier manufacturer of XQD cards on the market.

Sure, you have Delkin, but their stocks have been sold out since Lexar initially went belly up. Now, with both Nikon (with it’s Z Series) and Panasonic (S1) mirrorless camera users pushing the demand for XQD, Sony is going to be able to reap a windfall and so why share with the new Lexar? Prograde may have opted to pass on XQD last year for a similar reason.

That’s just speculation, however, There’s also a more likely scenario, that since XQD card slots can use CFExpress memory cards with a simple firmware update, it could be that Lexar was moving forward with getting back into the XQD card spec with the eye of pushing the transition to CFE forward. Compact Flash Express enjoys far faster read and speeds of up to 1400MB/s. Not only that, but future versions of the spec could push speeds of 7880 MB/S, which makes it ideal for the 8K landscape.

With its backwards compatible capability with a firmware update, it wouldn’t surprise me a bit if Lexar is playing a little brinksmanship here to get both Nikon and Panasonic to join Canon and support the CFE spec with a simple firmware update.

So, at the moment, Sony is really the only game in town producing top tier XQD cards, since Delkin is on back order, and Nikon likely gets their branded XQD cards from either Sony or Delkin. That seems to me to indicate that the future isn’t as bright for XQD as it was just a week ago. However, with this sudden change in the XQD landscape, perhaps Nikon and Panasonic will wake up and accelerate their firmware update schedule to support CFExpress. And should that happen, CFExpress production could explode.

We’ll just have to wait and see. 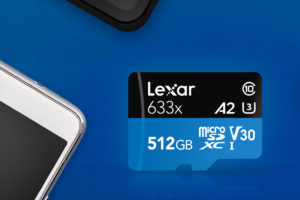 In other Lexar news, the media card company also announced the world’s largest microSD card for smartphone filmmakers (and by that I mean Android) .. the A2, with a storage capacity of up to 512GB. This high-performance card is a 633x UHS-I spec offers read-write speed of up to 100MB/ps. It can also be used in action cameras like the GoPro Hero 7.  The A2 will have a suggested price of around $300 for the 5512GB model. Available sometime later this month.

Nikon’s Latest Mirrorless Teaser is All About Lenses

Nikon is doing a stellar job of laying out bread crumbs towards the launch of their new full frame mirrorless camera. From shots in the shadows, to focusing on it’s large lens mount, to even […]

UPDATE: The Nikon Z6 will ship November 16th. Nikon really changed the game with their announcement of their Z Series full frame mirrorless line of cameras. But as they say, the proof is always in […]

By James DeRuvo (doddleNEWS) If it’s another Friday, that usually means another firmware update. This time around, Atomos is back with AtomOS 9.1, which updates the Atomos Sumo19 and Shogun Inferno external monitor-recorder for recording […]