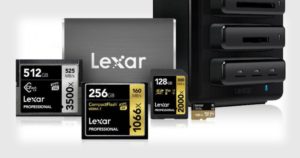 UPDATE: Via Peta Pixel, Great news coming out of Longsys, that they have concluded redesigning all Lexar media products from the ground up, and will be have resumed production of memory cards, card readers, solid state drives (SSDs), and USB flash drives geared toward the professional content creator. The company assured fans of the high performance media line that “high-performance and exceptional reliability will continue to be the cornerstone of the Lexar brand.”

Look for the products to be showcased at Photokina in Cologne, Germany next month, with shipping worldwide occurring shortly thereafter.

It was a sad day when Micron closed down their Lexar memory card production. The affordably priced memory cards gave filmmakers high speed performance across the entire memory spectrum. From SD to Compact Flash to XQD.  So when it was announced that Lexar had been resurrected and would be coming back, Nikon and Sony users rejoiced, because it meant that XQD was one step closer to returning to the Lexar quiver. Now it sounds like that it could happen as early as summer.

I’m pretty sure that the question you wanted me to ask them is “where are the XQD cards?” Here’s your answer straight from the VPs: Lexar is now out of stock of all XQD gear they inherited from Micron (including work in progress inventory), and so is B&H and Adorama, et.al. Lexar’s new owners have now dealt with all the licensing issues with Sony and have restarted production in China. – Thom Hogan, DSLR Bodies

According to a conversation had by Them Hogan of DSLR Bodies with a Lexar VP, after Micron’s Lexar brand was restarted as an independent brand coming out of China, the new Lexar Brand is currently busy preparing for Lexar XQD Memory card production. Executives of the new Lexar stated that Lexar’s new owners had to spend time renewing XQD licensing, and couldn’t bring any of Micron’s tooling along with the acquisition of the brand. So the factory had to be built out to produce XQD cards from the ground up.

Consequently, XQD memory card manufacturing won’t have inventories refreshed until at least June. Currently, XQD cards are out of stock at both B&H and Adorama, with “discontinued” still stated in bold red letters on the product listings. But with the licensing out of the way, and tooling the factory nearing it’s completion, production is ready to get started, and with any luck, those stocks will be replenished by mid summer.

Apparently, to produce an XQD card you not only have to follow the standard, but you also need patent licenses from Sony. Pay to play, baby.

Moreover,these licensing issues also give us a hint as to why ProGrade, the company started by former Lexar and Sandisk executives, aren’t currently planning to produce an XQD line, because of the licensing issues. The report indicates that along with a licensing deal, companies must produce XQD according to standards and patent licenses owned by Sony.

Hogan speculates that ProGrade may not want to pay give Sony a piece of the pie in order to bring XQD to the masses, at least until they’ve gotten deeper into their manufacturing and have established a firm clientele and manufacturing backlog. This part of the DSLR Bodies report is sheer speculation, mind you. Nobody knows ProGrade’s plans by ProGrade, and for now, they aren’t supporting the format.

But the good news is, that by this summer, shooters of the Nikon and Sony shooters will have more than just Sony to get their XQD cards, and more supply means lower prices. So get ready!

ProGrade Digital will not support XQD Memory Cards for Nikon

By James DeRuvo (doddleNEWS) ProGrade Digital came to fill the void left by Micron’s closing of the Lexar media card division. Lexar was a popular choice for media cards because they were fast, high performing, […]