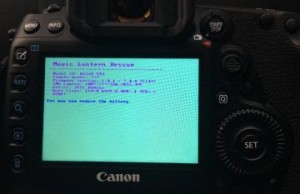 We haven’t heard much from the rocket scientists of Magic Lantern of late, and it’s likely because they’ve been working with Apertus on development of the Axiom 4K cinema camera. But now, we’re hearing that a1ex and his army of camera code geeks are working on the Canon 5D Mk. IV, and they’ve got a good foundation to start from.

Clearly, for anybody who’s invested in the Canon DSLR system and wants to continue using it for video, Magic Lantern is a very important part of the equation. Honestly, it was only a matter of time until they (“they” being a coalition of dedicated programmers) hacked the Canon EOS 5D Mark IV. – Bret Hoy, Planet 5D

It’s all as technical as you may expect, but from what I can gather (and I may be wrong here) the first step of doing display tests through the Magic Lantern software has been achieved and displayed by a1ex and the gang over at the Magic Lantern forums. According at A1ex, when the display test was run, there was an expected error in the QEMU memory core, which he managed to replicate and then fix. “At first I’ve noticed the display uses different registers,” wrote a1ex in his post, “and that resolution changed to 900×600 (from 720×480) but I’ve assumed the rest of the code is similar to 80D (and all other D6 cameras).”

The 5D4 is being investigated – the same as 760D, 80D and 7DII, so a lot of people are working in their spare time testing and reverse engineering the cams. It is tedious work, like collecting stamps. – axelcine, Magic Lantern forum member 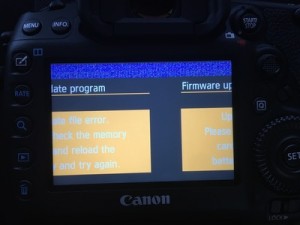 A1ex goes on to say that like the 80D, the 5D4 requires the display buffer to shift by 8 with an 8 bit per pixel value and using a similar color palette.  Based on these assumptions, and doing a little math, he was able to count the pixels, see what he had to change and move on to the next test.  “By doing this math, I had only one failed attempt, and that attempt was actually showing exactly what I had to change.”

But even then, he ran into the next roadblock by trying to jump to the Magic Lantern firmware on the card.  “from the current results, it should have at least turned on the backlight, and maybe also displayed some garbage,”a1ex said. He went on to quote another test member who said that his results were similar and that Canon may be intentionally blocking the ability to jump to the SD housed firmware.

As for whether Magic Lantern can mine Raw into the 5D Mk. IV, that’s a bit of a challenge since the new Canon camera shoots in 4K. The rub seems to be that of a limit in available RAM, where that much Raw data would only be able to shake hands with the memory for a few seconds, at least not enough to get more than a few frames.

So Magic Lantern has made the first few baby steps on the Mk. IV, and these guys are like a dog with a new bone, hungry to crack into it and get at the marrow. You can bet they won’t stop until they figure it out. Honestly, I don’t know why Canon just doesn’t scoop every single one of them up and pay them to do it. They do more for cinematographers on the Canon DSLR platform than any other “official” software engineer.  Canon should just call it the Lake Success Skunkworks division and pay them to make the platform all it can be. But that would be innovative, and we all know how Canon feels about that.