The busy bees who are doing the Lord’s work with Magic Lantern have breached another milestone, by achieving 5K  Raw at 24fps on a Canon EOS-M Mirrorless camera. It’s not without some caveats though.

It’s a pretty impressive feat considering that Canon’s EOS M is one of the older and lower end mirrorless cameras Canon has made (compared to what Canon has now). However, Magic Lantern has been minding the secrets of this venerable mirrorless model for a while now, and even though you can shoot at 24fps in 5K Raw, it isn’t exactly continuous. Moreover, Magic Lantern is using a 1×3 pixel binning method on the sensor, rather than focusing on a full sensor read out. 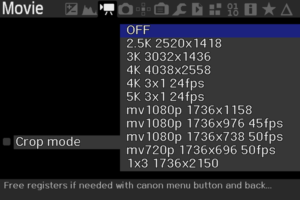 The 1×3 technique yields a resolution of 1736×2150, but when you wash it through Magic Lantern’s MLV app, you can convert it to full 5K. There’s even a method to achieve a continuous full sensor readout, and it’s mentioned at the Magic Lantern forum, in a post here. Users can also choose 2.5K RAW (2520 x 1418) at 10bit with a 2.35:1 anamorphic-style aspect ratio. 3K and 4K are also now available.

Reading through the forums, I can barely wrap my head around the science, so I’ll leave it up to more hearty souls to give it a go. I also don’t have an EOS-M Mirrorless. Yet. But if this matures and works, it may be worth picking up a used one on eBay to play with the results.

One odd wrinkle is that EOSHD mentions a cost of $150 to achieve it, and I’m not sure if that is to get a Canon M used on eBay to do it, or if you have to buy the MLV app from Magic Lantern to do the processing. I doubt that’s it though, as to my knowledge, Magic Lantern has never charged for any of their apps before. So I’m going with buying a used camera to play with using this technique.

I think it’s pretty cool that you can achieve a cinematic ultimate outcome of 5K Raw at 24 frames per second. It won’t be perfect at this stage, and users will likely have to do some massaging of the codec encoding to get it supported by their NLE.

But if it works, it’s a killer development. I wonder though, will it work with other models as well? What do you guys think? Is this worth investing in a used EOS-M for, or would you rather wait to see if results can be duplicated with other models? Inquiring minds want to know, so leave a comment below.

UPDATE: According to CanonWatch, Canon will begin shipping the EOS R Full Frame Mirrorless Camera on Tuesday, October 9, 2018. This will also be the same shipping date for the EOS-R kit with the RF […]

By Jame DeRuvo (doddleNEWS) Sony has revised their mid term strategy with plans to invest more than $9 billion in the next three years on next generation image sensors. With the goal of becoming the […]

With all the hype surrounding Nikon’s new Z series full frame mirrorless cameras, there has been a so much interest that Nikon has actually apologized for not making more of them fast enough. So when […]