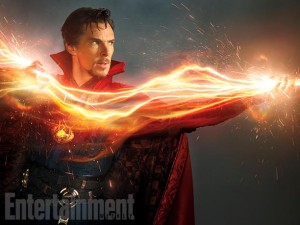 Marvel successfully jumped genres from superhero movies to space operas with Guardians of the Galaxy, and is planning on making a jump to a more mystical film with Doctor Strange. Bringing that character to the big screen was always going to be a challenge, but Marvel Studios is leaning on the strangeness (pun intended) of quantum mechanics, first seen in Ant-Man, to introduce a more magical based film to the universe.

Director Scott Derrickson announced that principal photography has wrapped via Twitter, by holding a copy of the Doctor Strange comic, Don’t Pay the Ferryman.

Seems like he wasn’t the only one visiting a comic book store, as Benedict Cumberbatch paid a surprise visit to JHU Comic dressed in his full Doctor Strange wardrobe:

One never knows when the Master of the Mystic Arts will stop by! Thanks, @jhuniverse! #DoctorStrange pic.twitter.com/z89MMlf276

Filming for the movie took place just outside the comic book store, so it was just a quick trip for Cumberbatch to walk in. But that’s not all that’s been appearing on Twitter, as that scene shot on the streets of New York has started surfacing online as well. These images, which are available via Getty Images, seem far more incredibly well shot than the usual spy set pictures, so I have to wonder if Marvel intentionally leaked them.

I wondered how they would adapt Doctor Strange’s costume to the big screen, and assumed they would be using the more toned down modern version of it. However, I love what they’ve done with the classic design, giving the costume a far more Mongolian nomadic feel, and yet staying close to the comics.

It also seems that Chiwetel Ejiofor, playing Doctor Strange’s arch nemesis Baron Mordo, will be an ally setting him up as more of a Loki-like character. Which is probably good news, since Tom Hiddleston has hinted that Thor: Ragnarok may be his final film.

Speaking of villains, Mads Mikkelsen character has also been revealed in images, which you can see via ScreenRant. The scarring around the eyes are a defining feature of his character design, but it still doesn’t give us too much of a clue as to who he is playing. Last December, executive producer Stephen Broussard said this of the character (via EW):

“I’ve seen lots of names thrown around. No one has quite picked the name that we’ve chosen for him. It would be fun to conceal that, if we can.”

Most fan theories have suggested he will play a character possessed by Dormammu, or be playing Nightmare. Neither sounds right to me, but I have no theories as to who he could be playing.

Doctor Strange will premiere in theaters on November 4th, 2016.