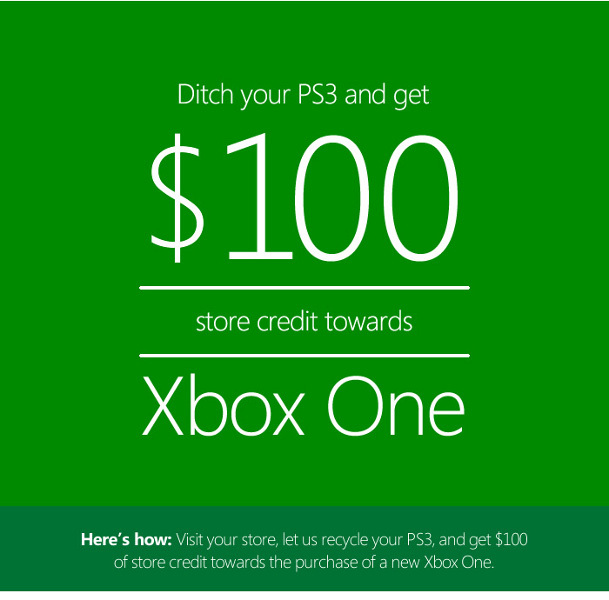 Since both next generation gaming consoles were launched, the Sony PlayStation 4 has enjoyed a sales advantage over the XBox One since it costs $100 less. And that’s real money for most gamers, and as such, Microsoft has had to play catch up. But, they’ve decided to close that gap by offering $100 store credit for those who ditch their PS3 and let them “recycle” it.

Trade up and get your hands on the new Xbox One. For a limited time, bring in your PS3, Xbox 360 S or Xbox 360 E and receive $100 of Microsoft retail store credit. – Microsoft’s XBox One Email

The way it look by the above, users go to “your store,” and by that I presume they mean a nearby Microsoft Store and bring along your old PS3 or XBox 360 to trade in. And considering that both are now selling for around $199, it’s not really that bad a trade in deal. And you only get the trade-in value if you’re buying an XBox One at the same time. So you’re paying full price for the XBox One through Microsoft.

But since there’s very little in the way of price difference, the issue is more whether there’s a Microsoft Store near you. For me, I’d have to drive a good hour from my house in order to get to a nearby store. So you factor in a half day lost, gas, etc. But even then, if I was jonsin’ to buy an XBox One, this may be the time to pull the trigger. However, if they offer it through their kiosks in Best Buy, then all bets are off.

But some are thinking that while the deal definitely closes the gap in pricing with the PS4, it seems that Microsoft may be doing this to entice XBox 360 users to stay in the family, rather than entice Sony users over to the dark side. It’s not lost on anyone that the XBox 360 is included in the trade in notice. “… if Microsoft is hoping this latest promotion will tempt PlayStation 3 owners by reducing the Xbox One cost,” writes Tom Warren at The Verge, “it might find that Sony console owners simply keep their old PS3 and pay $399 for a PlayStation 4.”

And there’s also the fact that users of the PS3 can also trade in their device at GameStop (for the K model), Amazon, and other places. So it may be that users will choose to forgo the offer altogether since there may not be a store near them, and they can get close to the same trade in value elsewhere. But still, it’s an effort by Redmond to close that gap and try and get users to consider the XBO and have been held back by the price difference. Course, I think they’d rather Microsoft just drops the price permanently and be done with it. I mean, they’re already losing money on the XBO anyway, so why not just amortize it further down the profit path and help fans out?

Me, personally, I’m tempted. But not for the reason you think. I’m tempted because I’m really interested in the Illumiroom concept and I’m hoping that Microsoft will get that out as time goes on. So to move over to the XBox One by trading in my PS3 would be a good gamble. And I get to play Halo to boot. But I have until March 2nd to decide if I want to make the one hour drive through LA Traffic, so I’m in no hurry.