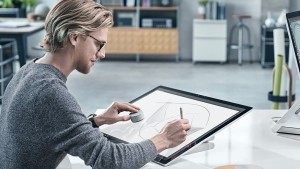 We’re living in strange times. Creatives are complaining that Apple is moving away from the old school professional and embracing the new mobile filmmaker, and Microsoft is flying head long into the void with a new Surface Pro Studio that it hopes will not only appeal to the professional creative, but the high end consumer as well.

“Our industry has seen the emergence of a variety of new technology … much has been slanted towards consumption … that technology has a place in our lives and be celebrated, however, I believe that in the next ten years will be defined by technology that empowers profound creation. At Microsoft, every choice we make is about finding that balance between consumption and creative expression.” – Satya Nadella, Microsoft CEO

Seeking to court the professional who feels abandoned by Apple’s obsession with consumer hardware, Microsoft has created the Surface Pro Studio, which harnesses the integration that is possible through Windows 10, to create across the entire array of technological category, from desktop to virtual reality through Holo Lens, mobile devices, and even the XBox One S gaming system.

Central to their new creative initiative is the Microsoft Surface Pro Studio, which aims to rival the 5K iMac in price and performance. The Surface Pro Studio comes with what Microsoft claims is the thinnest LCD monitor ever built at 12.5mm. The 28 inch touch screen display displays a 13.5 million pixels that provides 63% more resolution than a 4K TV.  Driven by Microsoft’s “True Color” standard, the display offers a 3:2 aspect ratio.

“Every now and then in pursuing our mission, we see the opportunity to create a new category of device. We seize these moments to create something so much more than a product.” – Microsoft’s Windows VP Terry Myerson

What makes the Surface Pro Studio stand out is its hing mount design which enables creators to adjust the angle of the touchscreen by more than 20 degrees, allowing them to lay out nearly flat for drawing and marking up documents, and back up to the standard display configuration. The hinge also collapses into the design, so they are neatly out of the way.

The Surface Pro Studio will be available from Microsoft in limited quantities this holiday at $2,999, $3,499, or $4,199 depending on what you want built into it. 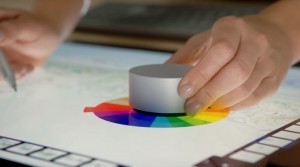 But where the Surface Pro Studio may really shine is its variety of peripherals that include a shuttle wheel device called the Surface Dial, which will be placed directly onto the SPS display to adjust screen brightness, color shading, volume control, and several mouse like functions like scrolling through a document and triggering menus.

“Over the next year, you will see us integrate 3D across our most popular Microsoft applications.” – Megan Saunders, General Manager, Windows Experiences Group

Additionally, Microsoft has announced the Windows 10 Creators Update, a series of apps that work through Windows 10 to give creatives an astonishing array of useful tools to capture something in the real world and bring across just about every spectrum from 3D to holographic and even virtual or mixed reality.

Declaring that the Windows 10 Creators update will bring 3D to everyone, the Microsoft team  showed off a cool mobile app that will start on Windows Phones and eventually be seeded out to other mobile platforms as well. The Windows Capture 3D Experience app was used to capture a series of photos of an object (in this case a sand castle) and then stitch it together to create a 3D model (a process called Stereolithography). From there, the model was input into the new Paint 3D app to create a new image in 3D space.

Then, you can take the creation and using Hololens, you can place it into a holograph and share it into a virtual space. They also showcased a virtual reality experience where you can take these virtual models, or even shop for them, and then input them into your real space using HoloLens and see what it would look like in the real world. You can imagine how easy it would be to create props or even virtual sets using this capture and Holograph system to lay out your sets before you even build them. And the cool news is that Microsoft has announced their VR headsets starting at $299.

There was a ton of other stuff that was mostly consumer oriented, but these were the things that should impact our industry and send technological ripples out across every department in a film project. If you want to see the entire keynote (and in under 10 minutes) check out the video below: