The Moment Invitational Short Film Festival is over and there’s an official winner. Selecting eleven mobile filmmakers to compete in a film festival style competition, viewers voted for their favorite and the winner was quite unexpected …. even for Moment.

After months of filmmaking, 1 epic premiere night, and 2 weeks of voting, we have a winner! 74,000 votes were cast for The People’s Choice… that could fill a large stadium. It was a close race, but one film came out on top and we happened to be hanging with them this week when we found out who won. It was fun to surprise them in person! ! – Moment Lenses

The great irony of the award winning entry, was that Moment was on location in Arizona with Mango Street films when they got the news that their short film “Make Sure You’re Missed” received the people’s choice award. Selected from ten invited filmmakers, plus the 11th filmmaker selected from all entrants who submitted a short film for consideration with the theme of “Suspense.” The winning entry was a thriller about a woman who is at the bitter end of a relationship, and coping with its lingering remnants.

The three minute short film was shot with some quick cuts, stunning visuals, and some great Steadicam like camera work. In addition to shooting with Moment Lenses, which I have a hunch its dreamy floating quality was thanks to a hand held 3 axis handheld gimbal like the DJI Osmo Mobile 2.

And while Moment’s press release states that the outcome was very close between all eleven films in competition (you can watch all entries here), Mango Street Film got the word, as the competition creators were in the same hotel room in Arizona when the final tally was announced. The key to victory was how well each filmmaker promoted their films on social media, in order to get the most votes as favorites from those who watched them. Then, along with a panel of judges selected by Moment Lenses, the final winner was determined. 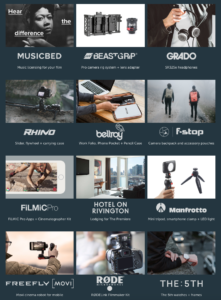 Mango received a hastily hand written check for $5,000 as top prize, plus over $3,000 in mobile filmmaking gear from Moment, RØDE, Beastgrip, Freefly Systems, Manfrotto, FiLMiC Pro and others.

Now that the competition is over, Moment is already looking to next year, which they hope will be bigger and better.  “We created the Moment Invitational to encourage filmmakers around the globe to push the limits of what can be shot on a phone,” the announcement said. “We believe that making films with a phone is not a limitation; it’s an opportunity. The mobility, size, and immediacy of a phone allows us to see the world differently. The Moment Invitational is our way of advancing this cause.”

In the meantime, they are nearing the final hours of their Moment Filmmaker Collection Kit campaign on Kickstarter, which has already raised over $1.5 Million dollars for a mobile filmmaking kit that includes an anamorphic lens, mobile battery case, filter mount, and a gimbal counterweight.

Moment Lenses have been used recently on the set of Steven Soderbergh’s Unsane, which was shot completely on the iPhone7.  So it makes sense that with that kind of high profile mobile filmmaking application, the company is looking to expand it’s cinematic bonafides with a custom filmmaking kit.

By James DeRuvo (doddleNEWS) As mobile filmmaking becomes more popular with low budget and independent filmmakers, so does the need rise for crafting a better image. How do you get every pixel worth of clarity and color […]

By James DeRuvo (doddleNEWS) As a recovering screenwriter, I know the long wandering in the wilderness that comes with trying to get your first big break. One of my teachers once told me that in […]