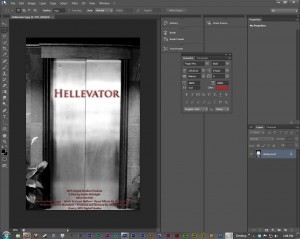 One tool that movie producers have used since movies started is still with us – the poster. Festivals need them for promotional material.  Actors like to be able to point at them with pride and say, “I worked on that.” Movie-goers pass by them, look at them and think, “Say, that looks interesting.”  Websites use them for art. DVDs use them for cover art. Video-rental, both online and offline, use them to entice viewers.

Our own Heath McKnight, Web Content Manager here at doddleNEWS (and also an indie filmmaker), had me do the visual effects in his short film “Hellevator.”  Recently he’s been getting it ready for the festival circuit.  He called me and asked if I could make a poster for him for the film.

The first thing to think about posters is size.  There are various forms of printed movie advertising in the world, including inserts, window cards and displays, but for our purposes we will focus on the modern U.S. movie poster, a.k.a. the one-sheet.  The modern one-sheet is 27 x 41 inches in portrait format.

I opened Photoshop CS6, and created a new file.  Using the custom setting, I created a file with a size of 27 inches wide by 41 inches tall.  Next was the hard part, filling the space.

Movie posters, like movies, are an art form.  Heath and I discussed about what he wanted, and what kind of a feel he was after.  Since his movie takes place in an elevator, and the elevator is as much a character in the film as the actors themselves, we decided to use the closed elevator doors with titles over them.

I chose the Trajan Pro font, 172 point size, which filled most of the elevator door.  I changed the text to a blood red color, since this is a horror film.  Then I stretched the scale , to make sure the “E” and the “V” were not on the crack of the doors.  Next I add some layer styles to the text, in this case some Inner Bevel upwards with a size of 57 px. and a softness of 3 px.

Next I make a new layer, and put in a white rectangle at the bottom.  True, I’m obscuring the floor, but I don’t think that really matters.  Finally, I go back and and my credits at the bottom inside the white space..  Corbel Bold is my font, with some Wingdings thrown in for the bullets between the credits.  Finally, a copyright symbol and I’m almost good to go.

I decide to play with the main title again.  I add some Drop Shadow, a distance of 3 px., a spread of 1%, and a size of 29 px.  Then I decide to wipe the colors out of the background, to make the lettering stand out more.  Choosing Image > Adjustments > Black & White drains the colors, leaving me a gritty elevator door.

And I looked at the results.  Something didn’t feel right.  I emailed a jpg to Heath.  He called me and said he doesn’t like the white space on the bottom.  I agreed.

I wiped out the white space, changed the font color to the same red, and added some drop shadow to the text.  Much better.

A quick email, and I’m done.  Now Heath has an image for withoutabox.com, and whatever else may come for his short film.  For more information on Hellevator, click here.