Marvel has provided an embarrassment of riches for geeks like me. Twenty-one films in an increasingly expanding Marvel Cinematic Universe, spanning both time and space, that seamlessly interconnects all of these movies. Films that entertain both fans and audiences alike– and light up the box-office.

That is not to say that there haven’t been missteps or flaws in the stories, but the overall quality and sheer breadth of these film are astounding. There is one thing I think that is really starting to show wear, however, and that is the origin story. Captain Marvel is an origin story and has all of the trappings of one, for better or worse. 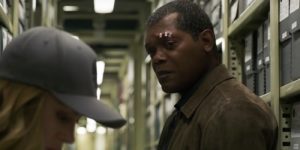 Black Panther and Guardians of the Galaxy were probably Marvel’s best origin movies because they don’t play like one. Captain Marvel leans more towards the likes of Ant-Man and Doctor Strange. It feels like a film that could have had more emotional weight behind it but the filmmakers pulled back a bit.

Having said that, everything else about the movie was fantastic. Brie Larson shines as Carol Danvers, adding these little flourishes (like blowing hair out of her face during a fight scene) that adds quite a lot. She is easily one of the most likeable and powerful characters in the MCU. She could definitely hold her own against Thanos or The Hulk but without feeling like a Mary Sue.

Samuel L. Jackson, well, I’m pretty sure I can just write out his name as a glowing recommendation almost all of the time and he’s no exception here. It is strange to see Nick Fury as a lighter character who is all smiles but Jackson seems to be having a ball playing a younger version of the character. Also the de-aging effects have been perfected here, it’s really incredible. 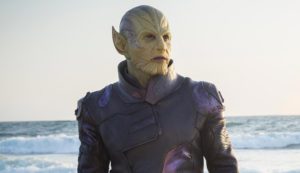 Remember how I said Marvel films have their flaws? One of those flaws tend to be villains but, man, Ben Mendelsohn as the Skrull Talos is something to relish with glee. The character is absolutely hilarious and very humanized even though he’s playing, basically, a space goblin. Like Cate Blanchett’s Hela in Thor: Ragnarok, it seems that Marvel is allowing their villains to have a lot more fun.

Where the film really stumbles is the story. Again, this is an origin movie and it really didn’t add anything all that new so it does come off as a bit cliche. I’m a huge fan of the 90s (and a lot of my all time favorite bands get some love in this movie) but there is no real reason to set it in 1995 other then it can’t take place after Avengers: Infinity War. That, and to sneak in a ton of connective tissue such as what really happened to Nick Fury’s eye.

Captain Marvel is very, very good but not great. But that’s ok, there’s a lot of raw material to build on now to create an unforgettable sequel that will feel more unique. And it will make you impatient to see her show up in Avengers: Endgame.

A Geek’s Reaction to the Avengers: Infinity War Trailer #2

By Danny F. Santos (doddleNEWS) Every so often, there’s a movie that exists as a climax to an entire series. The Lord of the Rings: Return of the King, Harry Potter and the Deathly Hallows, […]

Marvel icon Stan Lee has died. He was 95. We knew this day was coming, we just hoped it wouldn’t. In 2016, I came across a bit of news that Guardians of the Galaxy director […]