My review of Steven Spielberg’s latest homage to the 80s will be a pretty unique review compared to most of my usual reviews. Instead of waiting till the end to give you my star rating for Ready Player One, you’ll come across it far earlier — then we go into some deeper, philosophical territory. 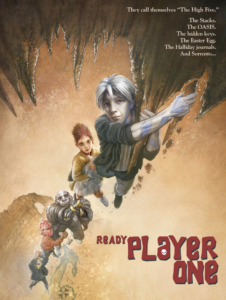 Fundamentally, what most people want from a critical review is “will I enjoy the film?” That question is pretty easy to answer for this movie. The characters are fun, the visuals are what you’d expect from a master like Steven Spielberg, the pacing is great, the soundtrack is well chosen, and there’s an entire sequence set in The Shining’s Overlook Hotel which I can’t help feel was Spielberg’s own personal tip of the hat to his friend and director Stanley Kubrick. It was so well rendered that I could swear it was a real set recreated for this movie.

Story-wise the film felt very much like a Goonies movie to the point where I would swear it was a spiritual sequel. I haven’t read the book so I can’t tell you how close the plot of the movie is to the novel but considering the material, I wouldn’t be surprised if there was some basis to that.

Based on all that, I’d say if you want to have a fun experience at the multiplex, that’s all you really need to know. The rest of this review is more about my thoughts as I left the theater about the nature of pop culture and nostalgia in film. And here’s where we get into some problems.

See, Ready Player One is a film built on references designed to leverage the nostalgia we feel when thinking about the 80s and 90s, and directed by one of the biggest names of that film era. Spielberg fits everything in this movie from Gundam to The Iron Giant to Back to the Future to Jurassic Park. There’s even a sprinkling of modern pop culture with characters from this era’s biggest video game Overwatch. Based on all of that, I couldn’t understand why this movie just didn’t engross me and fill me with glee.

The reality of the problem is that the movie just doesn’t understand pop-culture. All the references were window dressing. Disney’s Wreck it Ralph is a prime example of what I’m talking about here. Specifically the Bad-Anon meeting where Zangief says that just because he’s a bad guy doesn’t mean he’s a “bad guy.” Rich Moore, the director of this modern Disney classic, took a two-dimensional character from a video game and in a brief scene fleshed the character out in a surprising way that had an effect on the protagonist.

And that is what Ready Player One is missing. That interaction with pop-culture. That playfulness kids get when they open their toy-box and have Optimus Prime fight Skeletor and make up their own stories of why the two of them fight. The characters don’t have any relationships with the pop-cultural elements which, at best, are treated as tools and at worst wallpaper — and nothing more. There is no reverence for the pop cultural elements or deep understanding of them. It misses the point of having all of these different references in the film entirely.

All told, Ready Player One is a delight for those who love eye candy. But as a cinematic tale of our youth, it’s a slightly missed opportunity.

By Danny F. Santos (doddleNEWS) This will be a spoiler free review of Star Wars: The Last Jedi. For me, Star Wars is sacred. When I was a kid, I wore out my VHS cassettes […]

By Danny F. Santos (doddleNEWS) I was a fan of Jurassic World. Sure, it cribbed a lot from the original Jurassic Park but it delivered some great set pieces, captured some of the original magic, […]