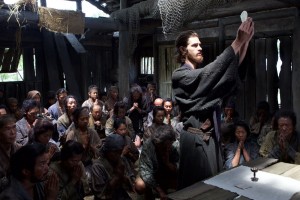 How do you approach a review of a film like Martin Scorsese’s Silence? This isn’t just a movie, but a decades long journey the director took to bring a film about spirituality and human nature to the big screen.

Silence is about two Christian missionaries, played by Andrew Garfield and Adam Driver, who travel to Japan in search of their missing mentor, played by Liam Neeson. Christianity had been completely outlawed in the country, and rumors that their mentor had abandoned the faith force them to find the truth, and in the process have their own faith tested.

At 160 minutes long, this is a film that has a very slow burn and takes its time — and that’s not a bad thing. Despite being about faith (and in particular Christian faith), the movie is thematically dense with loads of deep ideas about what it means to believe in something, and what it means to be human regardless of what you believe. I was actually very grateful for what I would describe as a meditative pace, because it gave me a lot of time to unwrap what I was seeing in my mind.

Gorgeously shot and deftly acted and directed, Silence is one of Scorsese’s finest works. It is really hard to believe that this was the follow up to the mad-mad world of The Wolf of Wall Street. With these two films, the director shows the breadth of his skill behind the camera.

What makes Silence work is that even if you swapped the religions for other religions, the movie would still stand. Being persecuted for what you believe really sucks, and watching other people suffer for you is truly heartbreaking. But at what point do you give up your beliefs to help your fellow human being? And if you do, what does that mean?

At this point I’m still mulling over a lot of what was explored in Silence. I really don’t want to go too much into depth about it but there are things in this film that challenge the audience — whether they are a believer or not. Even if the characters fall to one side of the belief debate or the other in the film, Silence itself remains, well, silent on a final answer about how can God let so much suffering take place. And even if he can, could you? The only thing it does definitively say is that the only place you’ll find that answer is within your own heart.

Silence is a tour-de-force that’ll be rattling in my mind for a while to come.

Here’s the trailer for Silence: