UPDATE #2 – Another week. Another change to the MoviePass membership status. This time, the company is limiting member usage to three movies a month. Further, if members want to see more than three movies, they can get a  $2-$5 per-ticket discount for any additional passes they purchase via the MoviePass app.

The change is on month to month subscriptions, though there is no word on if annual members have similar restrictions.

UPDATE: According to Business Insider, MoviePass CEO Mitch Lowe is raising the monthly subscription price to $14.95 (a 50% price increase) and will make restriction of new movies opening on more than 1,000 screens during the first few weeks. It is hoped that these changes will reduce the “burn rate” of cash by more than 60%.

But Wall Street isn’t convinced. This morning, the stock price of parent company Helios & Matheson opened at $1.81. After the announcement, it plummeted to its current value of .07 per share.

Remember when the sale pitch of MoviePass was unlimited movies for one low price? Then it was only one movie a day. Then it was, you could only see a movie once? Then it was you had to pay a surcharge on popular movies? Well, the latest moving of the proverbial line is that MoviePass will not allow customers to see hit films on opening weekend. PERIOD. 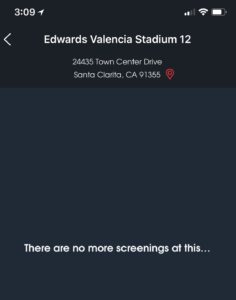 The update coming from this past weekend points to a rapid escalation in the death throws for MoviePass. Over the weekend, fans who wanted to go see Mission Impossible: Fallout, saw that over 75% of all the screenings for the summer blockbuster were all grayed out … or unavailable.

Now, today we’re seeing that there are no screenings available for any theaters in our area, leading many to believe that the system has been taken down again to prevent any further hemorrhaging of cash. There are also reports that the company has stopped replying to all customer enquiries via social media. Not a good sign.

Well, I think it’s safe to say that MoviePass is on death watch, and we saw it coming a mile away. The company ran out of money last night, and was unable to pay for tickets that members were ordering at the box office. For several hours the system was down, until a late night loan of $5 million primed the pumps again. But how long will that last?

We’ve determined this issue is not with our card processor partners and will be continuing to work on a fix throughout this evening and night. If you have not headed to the theater yet, we recommend waiting for a resolution or utilizing e-ticketing which is not impacted. – MoviePass on Twitter

Moreover, according to MacRumors, MoviePass CEO Mitch Lowe is reported to have called an company wide employee meeting, where he informed employees that subscribers will not be able to see major releases like Fallout, as well as upcoming big films like “Christopher Robin“ and “The Meg,” on opening weekend.  “Christopher Robin” is set to be released this weekend, while “The Meg” comes out on August 10.

Business Insider is also saying that Lowe “implied that the practice of not offering tickets to major movies would continue for the foreseeable future.” Even Forbes is calling it the beginning of the end.

Frankly, the company is doing everything it can to keep their flawed business model afloat, and in the process, they’re working overtime to sign up new members, while angering existing members who just want to see a damn movie and get what they paid for. It sounds like a classic Ponzi scheme to me:

Consequently, the more MoviePass moves to change the conditions of their agreement with members, the more angrier they get, the more they try to use their cards to get their money’s worth before the company goes bankrupt. MoviePass knows it, and it’s their own fault.

By James DeRuvo (doddleNEWS) MoviePass fans are well aware that the relationship between the movie subscription service and AMC Theaters have been contentious at best. Some theaters flat out refuse to accept MoviePass debit cards, […]

Why can’t it be both? That’s the question that the gang at Honest Trailers is asking this week, with their take on the summer shark flick based on Steve Alten’s blockbuster book, The Meg. So […]

If you took Movie Pass’ Twitter explanation at face value, you’d think that it was a mere technical glitch. But if you’re a MoviePass subscriber, you know that this is something that has been coming […]