The world’s largest short film competition is back for it’s sixth straight year, and it’s bigger than ever. Coming with over $1 million in prizes. Are you ready for the 2019 My RØDE Reel competition? Great, because it couldn’t be easier to enter.

“I’m so proud that something that started back in 2014 as a way to celebrate our passion for film has had such an incredible response from filmmakers around the world. My RØDE Reel has grown a lot since then, and each year we are blown away by the quality and diversity of films people submit. We’re thrilled this year to offer such a massive prize pool and to give all kinds of creators the opportunity to get their work in front of a bigger audience. To every filmmaker out there, I encourage you to get your camera out, get your crew together, and create something amazing.” – Freedman Group and RØDE Microphones CEO Damien Wilson 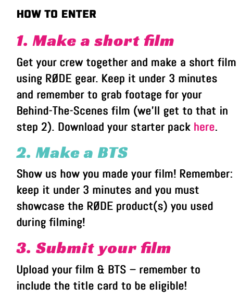 The sixth annual My RØDE Reel competition has become one of those bucket list items for a filmmaker. You make a short film about 3 minutes long, you make a behind-the-scenes vignette of equal length showcasing the RØDE products you used in the film, and then you share it with the world.  It really couldn’t be that simpler.

Over the years the prize package has grown steadily, and it now reaches over $1 million, with filmmaking gear, post production software, and memberships to several prestigious educational sights, and assets. 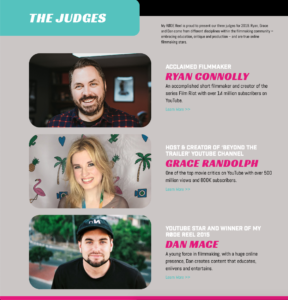 Judges this year have all come with an expertise in creating online content, and include the return of Film Riot’s Ryan Connolly, Grace Randolph (Beyond the Trailer on YouTube), and 2015 My RØDE Reel winner Dan Mace.

Entrants may submit as many entries as they wish, as long as they comply with the rules as laid out here. And while there will be only one winner per category, you can win multiple categories. So you’d literally have to no enter to lose. Practically.

This year, the ten categories include:

Submissions are being accepted at the MyRodeReel.com website from today, 16 April 2019, and closes at 12.00 midday AEST on 28 August 2019. Australia is 17-20 hours ahead of the US, so you’ve already lost a day. So you better get working on your film! August 28th is only four months away!

Can a $16 Camera Microphone Work for Low Budget Filmmaking?

By James DeRuvo (doddleNEWS) Low budget filmmaking is somewhat of an obsession for me. Whether you’re talking about creative DIY solutions you can build, or finding low cost hardware to add to your camera kit, […]

By James DeRuvo (doddleNEWS) As a Dad, one of the things that I do is record my son’s marching and concert band performances so their director can use them as a teaching aid. With audio […]

By James DeRuvo (doddleNEWS) 2014 was a life changing year for Ryan Thomas Anderson, as his Crash the Super Bowl commercial “Time Machine” took first prize. In addition to the $1 million prize, he also […]