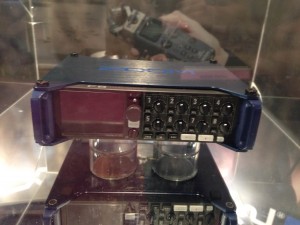 Zoom is a company that primarily services the music industry but was co-opted by the film industry right at the beginning of the DSLR revolution. The Zoom H4n became a work-around the fact that DSLRs did not come with XRL inputs (balanced or otherwise), or the ability to even control the gain on the recorded audio.

They obviously took notice and developed products that worked better for filmmakers, like the Zoom H6, but at NAB 2015 this year, they unveiled the prototype for their first field recorder, the Zoom F8, which features eight combination XLR and 1/4-inch inputs.

Specs on the new recorder have not been finalized, and Zoom is being tight-lipped about them, but one thing is definitely certain, the F8 is aimed directly at sync sound recording for film sets. Either side has four XLR and 1/4-inch combination inputs, allowing you to record up to eight tracks simultaneously. The F8 also features dual-SD card slots for instant backup as you record, and the full color LCD screen has an anti-glare treatment on it, which should make it readable in the sun.

Ergonomically, the recorder is well suited to be carried in a bag, which should come as a serious plus to on-set audio operators. It’s powered using eight-AA batteries located on the back of the device, which also has the Zoom mic connector, and my favorite feature, Timecode BNC in and out.

The Zoom team tells us that we can expect the finalized specs sometime this summer, and the price is still to be determined, although I’ve heard it’s being rumored to cost around the $1,000 range, which, if true, makes it a great budget field recorder.

The Zoom F8 is expected to be released in the fourth quarter of 2015 and you can check out the gallery below for a better look at the field recorder. Visit Zoom’s site for more info.