By the time day three of NAB had rolled around, I had already put over 20 miles on my feet. And with one day to go, I could take the foot a little off the gas and play co-host with Larry Jordan at Digital Production Buzz’s live NAB Show Buzz broadcast. But not before I swung by the 3D Robotics booth to get an up close and personal look at the new Solo software.

We got word of the new software upgrade on Monday, which showcased some very impressive drone safety features including geo fencing – where you can draw a virtual four point wall on a map in the app, and the Solo will not fly out of it. This is in direct contrast to the collision avoidance feature of the DJI Phantom 4 (they were pretty quiet this year at NAB, by the way), which 3DR says could give pilots a false sense of security as they over rely on hardware to do the avoidance for you. With the geo fencing, drone pilots can not only draw out the wall, but then adjust it’s parameters on the fly should conditions change.

But I also learned more about the Rewind feature. Originally, I thought it would be valuable for repeating shot after shot, and while that’s true, it was a previous feature of the Solo. No, the real value of having the Rewind feature, as 3DR guru Roger Sollenberger, is that the Solo can back track through the exact flight path in the event the pilot flies the drone into an area that he’s not confident he can fly it back out of, like a grove of low hanging trees.

“If the Solo flew into the area unobstructed,” says Roger, “Rewind will all it to follow it’s aerial footsteps back along the exact same flight path.” That’s comforting.

Another clever feature we discovered was that 3DR has added an optional powered tether, an ultra thin extension cord of sorts which can run power up to the drone so it doesn’t have to break off after 20 minutes or so of flight time.

With the powered tether, the Solo can stay up not only for hours, but for days. And to prove the point, Sollenberger said they decided to stress test just how long a Solo could remain in flight. Figuring it wouldn’t be beyond the designed 10 day limit of the rotor motors, they were shocked to discover that the tethered Solo remained in flight non-stop for 45 days! That’s robust. 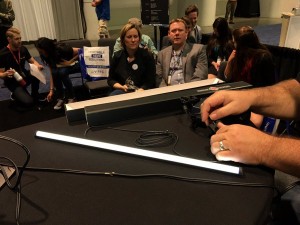 Heading back to the NAB Show Buzz booth, I sat in on two sessions with Larry Jordan, and had some great conversations with the makers of some cool lighting products.

The first was Peter Plesner of BBS Lighting who showed us a new ultra accurate Pipeline LED Phosphor light. With a rating of 97 on the Color Rendering Index, the Pipeline is able to yield a smooth, soft glow without any color spill over. Peter explained that this can be done thanks to the distance they designed in between the LED lights and the phosphorescent coating of the light wand. That extra distance is able to keep the light cooler and as such, give it a more even and accurate soft glow. It comes in 1-4 foot configurations and comes with a dimmer switch and a battery power brick.

Next came DoP Choice, which makes collapsible light grids and soft boxes that have hard plastic frames that are also foldable to fit in a backpack sized case. With these add ons to your LED light panels, you can direct the light and make it softer for ultra high definition work. And the build quality was exquisite.

Then we got to talk music with Killer Tracks, a music clearing house that offers music licensing for projects that are all exclusive in dealing with both artist and publishers. Their new catalogue has over 100,000 tracks and they assign a personal account executive to advise even one-person filmmaker teams on the best music to license for their project.

When I asked = about how they would deal with the latest YouTube copyright ID crisis, they replied it is easily avoidable by giving your clearance team a heads up before uploading, so that they can advise YouTube that any music is cleared in a given video. Having a representative that can get into YouTube’s arcane review procedure, and represent you, along with licensing the music, makes it well worth the investment to have Killer Tracks on your side.

Four o’clock came around on my last full day at the 2016 NAB Show, and I still had some work to do. We interviewed Automatic Duck, who makes some great workflow solutions for Final Cut Pro X, as well as some great effects plugins from FX Factory.

Then Schneider Optics came by and talked about their new 18mm prime lens and their new Sony E-mount options for their line of full-frame cameras. If you missed any of the live shows, you can catch them at DigitalProductionBuzz.com or NABShowBuzz.com.

By then, I was done. I had put over 27 miles on my feet ,and it was time to come back to the hotel and write. Next week we’ll have some video and audio interviews, plus our test footage from the Ricoh Theta S. Plus, our NAB wrap-up of what is the best tech we saw, in what has been a year of dot upgrades and improvements, rather than dramatic new product releases.

They were there to be sure, but over all, it’s been a more measured NAB with technology companies looking to refine and mature their existing products and finding ways to improve workflow.

As for virtual reality, I saw a few things I liked, mostly the Sennheiser VR Microphone, which records audio in 3D space from four separate mic tracks, which can then be stitched together within your VR NLE. But as for the overall state of virtual reality, well, I remain unimpressed. Maybe next year.

The Buzz Podcast – Aftershow II: NAB in the Cloud

By James DeRuvo (doddleNEWS) This week, we look at the intersection of the Cloud with collaboration, visual effects and storage, with some very interesting discussions regarding new products and services announced at NAB 2018. Join […]

By Larry Jordan If you haven’t heard of it before, Kyno is media management software that allows you to find, preview, organize, tag and transcode your media. Then, it simplifies moving media – or data […]