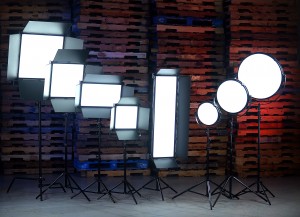 One of my favorite things at NAB every year are new lights. While arguably not as sexy as a new lens or new camera, I’ve always thought of them as a more important key to a good image than they’re given credit for. You can always use a mediocre camera to get an exceptional image if the scene is lit properly.

So with that in mind, let us see what the light makers at this year’s NAB Show 2017 have in store!

This has to be on every cinematographer’s Christmas list. Kino Flo has just released the new Freestyle LED light panel, and it’s a doozy. The light can detach from its fixture in order to become a lightweight lighting panel, and comes in two honeycomb louver flavors to remove spillover: 60 degree and 90 degrees. Not only can the light’s brightness be adjusted, but it comes with the ability to adjust its color profile from 2500 Kelvin to 9900 Kelvin. This gives you the ability to use any color imaginable and match any single gel on the market. Finally, the light also has a neat magenta/green control in order to match the light to your specific camera profile.

This small light packs a punch with 888 LED lights on a small, portable chassis. But not only does it pack a punch, but it can take a hit as well. In order to combat lights that break on set, Aputure has crafted the new Amaran Tri8 with an aircraft grade aluminum body and a clear polycarbon front. Like most LED lights, this one can be dimmed, and can fetch temperature colors from 2300 degrees Kelvin to 6800 degrees Kelvin. Unlike most other lights, however, this thing can take a beating. The Aputure Amaran Tri8 is expected to be available in May, with a street price of about $400 USD to $500 USD.

Another offering from Aputure is the new LED Light Storm COB 300d. The “d” in its name stands for “daylight,” while the 300 stands for “watts.” That’s right, this is a mammoth 300 watt LED light that simulates daylight, which Aputure claims can produce 82,000 lux of light output. Even with light fall off, it’s capable of 31,000 lux at almost 3.3 feet (1 meter). The Light Storm 300d is expected to ship in July, and while no price has officially been given, the manufacturer is hoping to be able to sell it at a price point of under $1,000.

The new Fotodiox Pro Factor lights line is a series of nine LED soft lights, which range in size and shape. The rectangular lights come in a range of 1-foot by 1-foot models, all the way to 2-foot by 2-foot, and 1-foot by 4-foot sizes.  The Jupiter model is their series of round lights, and they range in size from 12-inches to 24-inches. The size that you should really pay attention to is how thin these lights are, at only 1.5-inches thick. The Pro Factor can produce color from 3200 degrees Kelvin to 5600 degrees Kelvin, and range in price from $660 USD to $2,400 USD. They’re available for purchase right now from their site here.