Day 2 of NAB 2018 started with a visit to the RED demo suite on the second floor, which housed a darkened, low light scene and showcased the performance of the RED Gemini Super 35mm low light sensor. But Yamaha had a cool new USB recording device, and who’d have thought that watching kids play video games would be a serious broadcast thing. Welcome to the world of eSports!

OK now that the intro is done, back to RED. Red setup this low light scene and put a RED Dragon camera side by side with their new Gemini 5K camera. Gemini was developed under commission with either NASA or SpaceX to image in deep space. Though Gemini is a variant of the Super 35mm Helium Sensor, but fine tuned for low light of space. It has two extra stops of dynamic range and can see really well in low light, and you’d need to stack ND filters onto it in order to shoot in daylight. Jarred Land called it a “Vampire for Light.” That’s how sensitive it is.

Looking at the image to the right, it’s clear to see just how well the Gemini sees in low light. While the standard Dragon sensor shows a dark image only barely lit by a pair of lamps, the Gemini lightens the image of the room like someone put up a pair of lights or used a flash. The image was quite workable as well. Sadly, that was as far as we could get due to an incoming meeting, but I was quite impressed. 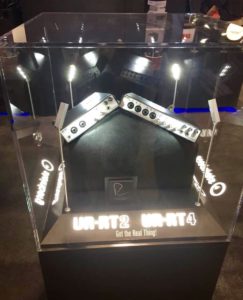 As I came down the escalator, I ran into an old friend of mine who is a VP at Yamaha. Dave looked at me and said “dude, you have to see this.” That’s when he led me into Central Hall to show off Yamaha’s latest creation, the UR-RT2 and RT4 USB recording interface.  The UR-RT2 enjoys a 192k sample rate using  USB I/O 4 D mic pre-amps using Rupert Neve transformers. The result is sonic characteristics that are bold and warm.  Dave said a similar product of this quality should go for at least $3,000, and this is a game changer at at $599.

If you’re into serious audio recording, this is a bargain.

And did you know that eSports is a serious broadcasting thing? What are eSports? It’s basically video game playing, but at a professional level. Yeah, your kids can make a living running a first person shooter or racing cars in the Rocket Racing League. And it’s so serious, that streamers are adopting the ESPN broadcast model and have analysts, play by play booths, sideline reporters, the works. And eSports Broadcast production solutions are a serious thing in the South Hall this year! 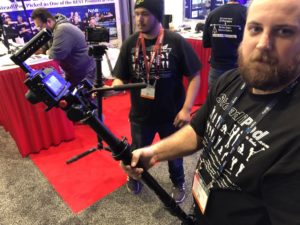 Then I ran into a character from a few years ago, Eddie Barber, the inventor of the Steadipod. The Steadipod is part monpod, part tripod, and part SteadiCam. It works on the principal us using a ball bearing array spinning around the central core, and counter balanced with retractable feet that are sturdy enough to act as a tripod when extended. They can also be used to extend the Steadicam’s reach.  In fact, out of the bag, the Steadipod can perform 15 different functions, including acting as a handheld stabilizer.

And it’s pretty legit, it can be balanced to maintain a steady image, much like a Steadicam or 3 axis gimbal, but without the electronic or heavy cost. This is definitely for the nimble, one man crew looking for a way to get a solid image while moving, without over complicating things. 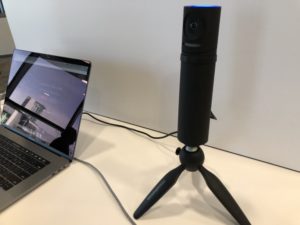 I also spent a little time at the Facebook Live Pavilion and saw a cool camera called the MEVO 4K streaming video camera. The MEVO is great because you can create a multi camera shoot with a single 4K camera. The MEVO’s iPhone app uses quadrants of the 4K image and you can create 4 camera shots in 1080p from a single 4K stream. So you could have a two shot, and then left right and even center close ups.  Great for streaming live interviews, talking head segments, or even a live demo. And MEVO also has face tracking, so you can lock it onto your face and MEVO will follow you around your set. You can stream directly to Facebook Live, YouTube Live, etc. without any back end processing. Just go live.

The MEVO Camera costs $499, plug there’s the optional Boost battery for $250, that adds additional battery life and lets you connect the camera to your desktop via Ethernet, rather than WiFi.

Finally, I leave you with this poor fellow, who I imagined was worried that his bachelor’s in theater arts would never pay off, until he got this gig at NAB!  Be the camera, my man!

RED Celebrates A Decade Of MYSTERIUM

By James DeRuvo (doddleNEWS) When you think about milestones and RED, you’d expect to see great fanfare. But they didn’t even put out a press release. Instead, in celebrating the tenth anniversary of their MYSTERIUM […]