There seems to be little doubt that the future of experimental film and video will be VR. I personally think it’s a limiting when it comes to narrative fiction but it opens a lot up for more non-fiction and documentary films. While VR video recording has come a long way, sound is just catching up. But before we get the news on that front from NAB Show 2018, let’s dive into another end of the audio spectrum: music.

We’ve written about Musicbed before and they are one of the better music licensing sites out there relying on machine learning to tailor music recommendations for users. The platform relaunched their service last summer to make the process of purchasing music easier and more affordable — now they’ve launched a new subscription service called Musicbed Membership.

The service will offer multiple plans for everything from large production companies all the way down YouTube creators. Some of the features Musicbed says we can expect include:

Musicbed Membership is set to launch sometime in the summer. No pricing has been announced but you can sign up to learn more here: musicbed.com/membership 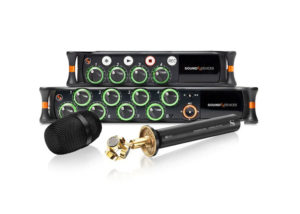 The Sennheiser AMBEO VR mic is not exactly a new device and was on display back at NAB Show 2016. Meanwhile, Sound Devices announced their sub-$1,000 field recorders with the MixPre-3 and the MixPre-6 at last year’s NAB Show which was followed by the MixPre-10 later that same year. However, the two companies have come together to offer VR audio recording for the MixPre-6 and MixPre-10 recorders.

Sound Devices will offer free firmware updates which will support onboard AMBEO A-B conversion for the AMBEO VR Mic as well as support binaural headphone monitoring. Sound Devices says that this will allow content creators “to assess immersive audio content right at the time of capture without requiring a post-production workstation.” The firmware update is expected sometime in Spring 2018 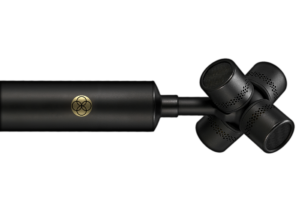 While we’re on about VR mics, RØDE has announced their own rival to the AMBEO VR Mic with the RØDE NT-SF1. This new mic was born from a company called SoundField which was purchased by RØDE’s parent company the Freedman Group. SoundField specializes in high-end ambisonic sound recording so it was a matter of time before they collaborated on a VR mic.

There aren’t many details released for the new mic but we do know that the four mics are capable of A-Format recordings which can be transformed and manipulated in B-format via a plug-in. No word on exactly when the NT-SF1 will hit the market but it should come in at less than $1,000.

All in all, it seems that 360º audio is now finally starting to catch up with VR live action video. I think it will still be very interesting to find out how audio will be used since most filmmakers will want to focus the audio on specific dialog during a scene. It’s a fun time to be experimenting with an immersive medium so it’ll be interesting to find out what content creators come up with.

UPDATE: Sigma announced pricing and availability for the new 14-24mm DG HSM Art lens this morning. It will sell for $1299 USD and will ship in mid March. By James DeRuvo (doddleNEWS) Adding to an already […]

By James DeRuvo (doddleNEWS) I’ve often said that I’m not really impressed by virtual reality as a storytelling platform. But to witness an event like a sporting contest, VR could be the next best thing […]