Let’s face it, even though I put 24 miles on my feet in four days, with nearly four multi level halls packed with technology at NAB, you just can’t see everything. So here are a few things we missed, but which we think are pretty cool for filmmakers.

Moza Slypod. What could be better for a runner than gunner than a monopod, which can also work as a motorized slider! That’s the design of the Gudsen Moza Slypod.  Weighing less than 35 oz (1,000 g) the MOZA Slypod comes as a 2 in 1 motorized slider and monopod. It’s made out of carbon fiber, and can handle a maximum payload of 40 lbs (18kg) vertically, and a 26.5 lb (12kg) payload horizontally.

The motor inside the Slypod produces 1NM of torque, which can move the maximum payload from 0 to 10,000 rpms in only 15 microseconds. So it will smoothly and deliberately slide along the monopod track with no lag or judder.  The smart motion control algorithm also enables motion that is repeatable for consistency from shot to shot.  Slypod is also CanBus supported for connecting multiple MOZA products, and there are plans to update the firmware for multi-axis movement in the future. No word of pricing and available, though.

The advantage of recording in 32 bit, users don’t have to manual trim, or set their gain, as the floating point renders gain irrelevant. The recording is done at one set level. The six knobs are designed to simply fade out the volume, but when normalized, the same audio is still there. It’s pretty mind blowing.  Zoom says to think of the audio recording as a sound based Raw file that can pick up everything, but can also be adjusted in post.

No word on pricing just yet, but Zoom plans to announce that next month, with expected shipping in June of 2019.

“We set out to design the most incredibly high contrast and detailed display possible, and when it came off the production line the Shogun 7 exceeded even our expectations,” said Atomos CEO Jeromy Young. “With multi-camera switching, we know that this will be the most powerful tool we’ve ever made for our customers to tell their stories.” 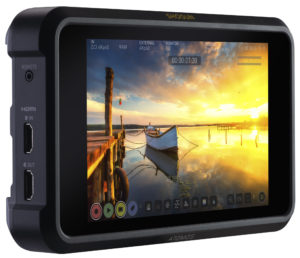 Atomos Shogun 7 Monitor-Recorder-Switcher. Atomos‘ latest addition to the Shogun line not only ads a 7 inch, 1500 nit monitor-recorder that can record up to 4K HDR, but it can also do double duty as a live multi-cam recorder-switcher that’s capable of managing four independent HD-SDI streams at 60p.

The Atoms Shogun 7 boast a contrast ratio of 1,000,000:1 thanks to 360 individually controlled backlit Les, which enables zones of contrast to be managed for rock solid blacks and impressive color gamut.

Operating with AtomOS 10, the Shogun 7 can also send a live Dolby Vision stream with 12 channels of digital audio, along with Raw, ProRes, and DNx recording streams, and this could be the first monitor to take advantage of Atomos’ licensing deal with RED. But make no mistake, the takeaway here its that through the Shogun’s powerful 7″ touchscreen display and interface, shooters can do live multi-camera switching without the need of additional hardware. 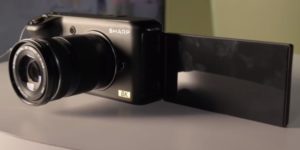 BTW remember that 8K pocket camera that Sharp previewed at CES last January? Well, the word on the street is that it will cost $4,000 and will record 10 bit video when it hits the market t the end of the year.

Cinema 5D got a chance to shoot some test footage with the prototype … check it out.

As we continue to wade through all the NAB product announcements we have in our email, we’ll look at other things that are worthy of highlighting.

By James DeRuvo (doddleNEWS) Another great product that landed at NAB came from Atomos, which is adding an entry level 4K external monitor-recorder to their Ninja lineup. The 5″ Ninja V will record 4K directly […]

By James DeRuvo (doddleNEWS) Day 3, and I took my time walking all around the Central Hall of NAB. I wanted to make sure I didn’t miss any small jewels of gear, and I’m glad […]