The halls of the Las Vegas Convention Center are now empty, and everyone has flown back home. After a few days of decompressing, it’s time to take a look at what was the best of NAB. This year was a different kind of year, in Las Vegas. There just weren’t a lot of huge announcements. But there was plenty of incremental improvements and updates, and there are a few things that really captured our imagination. So, without a doubt, here are the best of NAB winners for 2019. 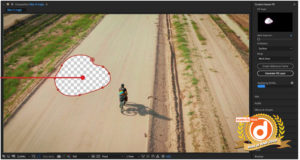 Best Software – Blackmagic took on Adobe with some improvements to DaVinci Resolve 16 that are very exciting. However, while Resolve 16 is going to have a similar feature as Adobe’s Content-Aware Fill for video, we really have to give it to Adobe, as the After Effects tool has really improved since it was previewed as Project Cloak during the Adobe MAX Sneaks panel last year. Adobe showed a a video of kids playing soccer in a muddy field, with mud and water flying everywhere, and the Content-Aware Fill was able to make the soccer ball disappear as it flew across the frame, in between players. It was as if Adobe was offering some literal “blackmagic” behind the scenes to make the image disappear.

There was a few distortions and artifacts, but certainly nothing that can’t be fixed in post. And it’s bound to get even better as Adobe dials it in.  So while it was a close decision, we have to give our Best Software to Adobe Creative Cloud, and it’s Content-Aware Fill in After Effects.

Best Hardware – There was a lot of interesting new hardware this year, mostly new versions  of existing models. One thing was Sharp’s 8K Pocket sized camera that we saw last January at CES. It’s still in prototype form, and as such, is only currently capable of recording 8 bit 4-2-0 internally. Sharp says, however, that ultimately the camera will record in 10 bit, but it’s really not at the point where we can definitely say it’s going to be a game changer. But it is aimed squarely at independents, you tubers and other content creators.  So for now, I’ll relegate it to honorable mention.

Next came Blackmagic’s DaVinci Resolve editing keyboard. This keyboard is designed to keep both your hands working on your editing workflow, with a mechanical design, and built in shuttle jog and various buttons to select in points and out points. A robust and elegant solution to be sure, but what’s killing it is the $995 price tag. Given the choice of upgrading your existing rig to future proof it for a 4-8K universe, and buying a keyboard that will smooth out your workflow, I think that few, other than the BMD faithful, will invest in the DaVinci Resolve Keyboard.

Blackmagic also showed off a battery grip, which they say will extend the battery life of the Blackmagic Pocket Cinema Camera 4K. If you’re a user, you are well aware of how short the battery life is due to its massive 5 inch touch screen and 4K recording. Those features can suck the life out of the battery with vampiric efficiency, leaving many changing the battery in as little as 45 minutes.

The Pocket Cinema 4K battery grip is designed to extend the usable battery life of the Pocket 4K to up to 2 hours thanks to two battery cells that are housed inside. But what’s really strange, is that Blackmagic didn’t design it around the Canon LP batteries the camera itself uses. Instead, the grip uses a pair Sony NP-4 battery cells.  Most likely, users have a few if these in a drawer or with a mobile monitor or LED light, but it’s just strange that BMD designed this grip so that users will have to be sure they bring along two different battery models when shooting out in the field. But for $245, it’s still a well built solution to a persistent problem.

Then there was Polar Pro‘s Peter McKinnon edition variable ND filter, which will likely have more photo applications than video. But the filter is so well built and so well  designed, that videographers will likely be allured to it as well. Certainly worthy of mentioning in the mix for “best of.” 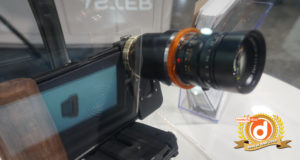 However, we have to give the best hardware to Padcaster’s Uni-verse depth of field adapter for mobile filmmaking. For $450, users will get a mini Padcaster cage to house their iPhone, the adapter itself, which goes to a PL Mount, and a wooden hand grip for better control. The adapter will also come with a PL-e mount adapter, so you can use Sony lenses with, and I hear that there will be EF and other adapter rings down the road.  It’s sturdily built, and I really like that the high grade aluminum cage will keep your iPhone good and safe, and its designed with a rubber interior housing that can be replaced as you upgrade to the next generation. Will there be an Android version? Only time will tell.

Have there been other depth of field adapters we’ve seen? Sure. But none as elegant and well designed as this. I definitely think, though, that with mobile filmmaking really picking up speed as a viable filmmaking alternative, the Padcaster Uni-Verse is an elegant solution for bringing depth of field and bokeh into your mobile video image. 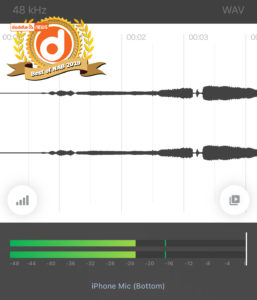 BEST OF NAB. That leads us to the best in show. And we’ve got to give the nod to FiLMiC Pro and their new FiLMiC Audio app. This app will give users who have a spare iPhone laying about the ability to transform that additional mobile device into a wireless remote operated field recorder.  That alone would be a cool development, but FiLMiC took it a few steps further.

First, with a lightning to minijack adapter, or if your device has a headphone jack, users can add an external microphone like a LAV mic to it. Then, there’s the wireless control and sync. When the operator of FiLMiC Pro on the main iPhone triggers recording, the audio app will begin recording as well.  Once done, the audio track auto-syncs with FiLMiC Pro wirelessly, replacing the audio track with the FiLMiC Audio track using a singe tap. The audio records with CD quality sounds at up to 96 Khz, with 32 bit floating point audio recording and support for WAV/AAC/PCM and AIFF codecs and has full manual gain control, plus remote activation via the Apple Watch.

FiLMiC Audio will be launched later this year, presumably this summer, after BETA testing, and although we don’t know how much the app will cost, it looks like Team FiLMiC is using the same approach as they did with FiLMiC Pro. Releasing a basic recorder first, and then bringing on additional features down the road as time goes on. This explains why FiLMiC Audio will recording in CD quality stereo first, but in time, we’ll see more features to be sure, as the app matures and mobile processors get more powerful.

FiLMiC Pro started at .99, but I doubt Audio will be that cheap … maybe $4.99. Whatever the price, for mobile filmmakers, FiLMiC Audio is going to be a fast addition to their toolkit, since almost all of us have a spare iPhone lying around, and it will support iOS11 devices all the way down to the iPhone SE.  And you’ll get in on the ground floor for getting the more advanced audio recording options as they come online.

As a Best of NAB winner, it really is a no brainer, since you already have most of what you need to use it.

The Blackmagic Pocket Cinema Camera 4K may be the very first handheld camera that is designed to film on three different media storage options. It can write to CFast 2, SD, and to an external […]

Filmmaking 101: Free Up Space on Your iPhone for Mobile Filmmaking

By James DeRuvo (doddleNEWS) Mobile Filmmaking is really hitting it’s stride, with more filmmakers like Steven Soderbergh opting to use the mobile device for shooting their next big feature. But if you’re shooting in 4K, […]

By James DeRuvo (doddleNEWS) Last month, the Freefly MōVI set NAB on fire and President Tabb Firchau joins James, along with doddleNEWS publisher Jim Robertson to talk about it and the Cinestar camera platform. You […]