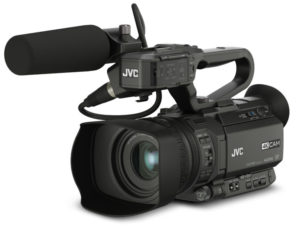 JVC’s latest 4K professional video camera is looking to be a one stop TV studio, but offering built in integrated graphics and live streaming. Will citizen journalism take it to the next level?

Designed for what JVC calls “enhanced, single camera production,” the 4K GY-HM250U provides news centric lower thirds and full screen titling for recorded and streamed video output without the need of an external video switcher. The camera links to a tablet or smartphone via WiFi and users then navigate to the camera through their mobile browser to customize and enable the graphics package, and then stream live to the internet. The benefit here is that the graphics feature is platform neutral, so users can customize it on either iOS or Android.

JVC also allows users to customize graphics by uploading up to 50 JPG or PNG graphics such as logos, icons, or event text based titles like lyrics or readings. Graphics can also be made full screen, switching from the video image, and advanced either manually or with preprogrammed user defined timing.

That makes the GY-HM250U ideal not only for local news gathering and live sports productions, but also for smaller churches and other organizations looking to take their events to the next level with multi media without having to invest in tens of thousands of dollars in switches and other broadcast or streaming equipment.

JVC also has announced a sports edition of the GY-HM250 which offers score overlays for sports including football, basketball, baseball, hockey, soccer and volleyball. The score overlays can be placed anywhere on the screen through a mobile device and the WiFi connection, or automatically via Sportscast Scorebot when wirelessly connected to the internet.

The democratization of news gathering with broadcast quality video and graphics is really giving local sports, news, and even worship centers the polished, professional look of a broadcast studio truck, and doing it without sacrificing image quality. It’s a great time to be an independent.

Soderbergh: With New Film, Mobile Filmmaking is the Future

By James DeRuvo (doddleNEWS) Steven Soderbergh is no stranger to exploring new techniques and concepts in his feature films, but with his latest thriller, UNSANE, the prolific filmmaker turned to the iPhone to capture every […]