Adobe announced a variety of new features in the April update to their media software, released  just before the start of the 2019 NAB Show. The one that got the biggest buzz was Content-Aware Fill in After Effects. Which is cool, I guess. But I don’t use After Effects, so I’m less wowed than others.

However, Premiere adds several very exciting features that are REALLY useful, even if they don’t generate headlines. Let me show you some of the smaller ones – the ones you’ll use everyday that didn’t get the big headlines:

There are many other features that I’ll cover in upcoming articles. Visit Adobe’s website for the complete list.

Big changes are coming with the next major release of the macOS. I’ve already talked about the removal of support for QuickTime 7 codecs here.

However, in addition to codecs, there’s also the issue of GPUs. Premiere is now aggressively warning about unsupported NVidia GPUs when you launch the software. In my case, I’m writing this newsletter on a 2013 iMac with an nVidia GPU, so this is a supported Apple implementation. Still, if you are running an older system which you’ve personally updated to nVidia, be very, VERY cautious about updating to the next macOS.

We’ll learn more about what’s coming in the opening keynote at the upcoming WWDC Monday, June 3. For now, you don’t need to do anything except be aware that changes are coming.

The really big news for me, though, is Adobe’s support for eGPUs and dual GPUs. This means that Adobe’s performance is dramatically faster especially using today’s state-of-the-art GPUs.

“Better load balancing across multiple GPUs, including eGPUs, provides faster rendering and exporting, especially with professional codecs, like Apple ProRes, RED, and others – on both macOS and Windows.” However, “these load balancing changes do not affect playback, which does not use multiple GPUs.” (Adobe Help)

To make the most of your GPU, be sure to set graphics rendering to Metal. This provides the fastest performance and will be supported by Apple moving forward. (OpenCL has been deprecated by Apple, and won’t be available in the future.)

NOTE: Adobe moved this setting out of Preferences with this release and into the screen you use to create new projects. 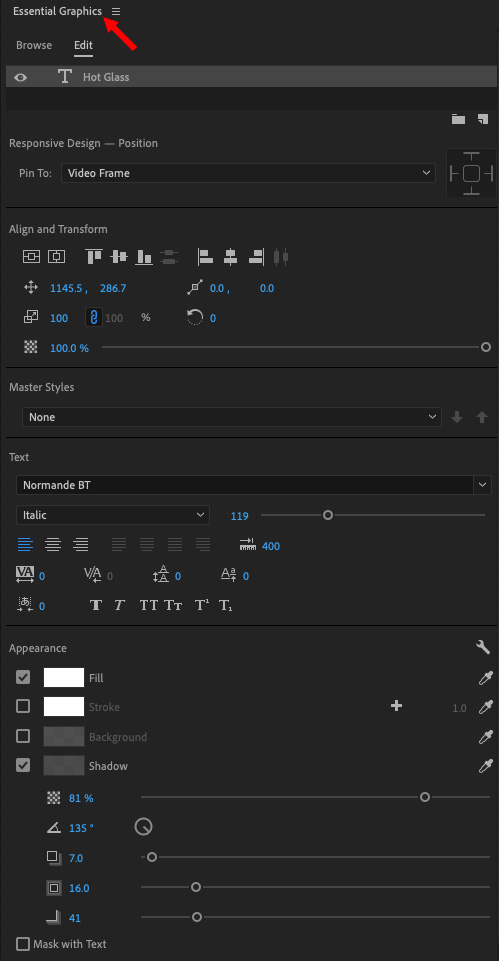 As well, the Essential Graphics panel has several new tweaks:

And, while it isn’t new with this version, I really like how easy it is to apply drop shadows to text, using the settings at the bottom of the Essential Graphics panel. 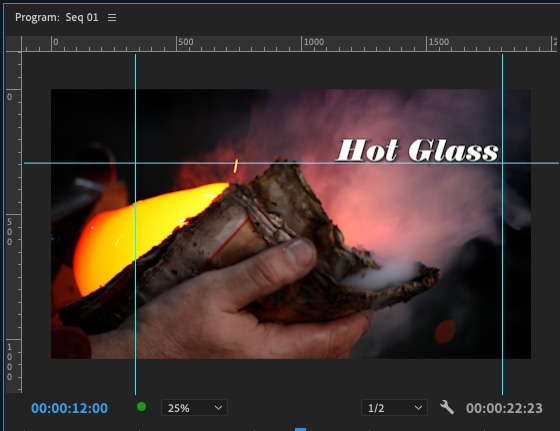 To turn them on, click the Wrench icon in the lower-right corner of the Program panel. Then, in the popup menu, select Rulers, Guides or both. To create a guide, drag it out, or down, from a ruler.

NOTE: You can also display these using the new View menu. More on that in a minute.

To remove Guides, go back to the Wrench and choose Clear Guides.

“You can also color code guides for different purposes and save guide setups for specific tasks, to ensure consistent positioning for graphics elements like lower thirds, logo placements, and more. After you save your guides you can export them to use later. You can also import guides created in After Effects and bring them into Premiere Pro.” (Adobe Help)

NOTE: I should also mention that you can snap objects, both video and text, to guides, to each other, or to tracked items.

In the rest of the article, Larry looks at auto-ducking, the new view menu, and user voice. Read it over at LarryJordan.com

By James DeRuvo (doddleNEWS) To everything there is a season. Back in the 90s, Flash was all the rage. But by the time the iPhone came around, it was resource hog that was filled with security flaws […]

By Larry Jordan Apple showcased the future and we have two reports on WWDC18. Then, we look at the state-of-the-art in media collaboration tools with reports from Avid, Adobe and Frame.io, each highlighting how we […]