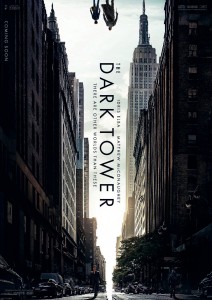 The Dark Tower finally is coming, without a doubt, in August. It was delayed from January to February, and finally to the late summer frame. The legendary book adaptation has gone through different directors (JJ Abrams, Ron Howard, etc.) and studios, and we’re getting a film adaptation to Stephen King’s classic novel series in a matter of months. And we have a new trailer!

Idris Elba is always great, and as Roland the Gunslinger, he shines. Matthew McConaughey plays the Man in Black, and though he doesn’t appear much in the trailer, he feels miscast.

It’s not without controversy; I’ve talked to a few of my friends who are hardcore The Dark Tower fans, and they’ve said there are issues, though, mostly that it doesn’t appear to follow the books. We’ve reported it’s more of a sequel to the books, in addition to being an adaptation. Director Nikolaj Arcel (The Royal Affair) said this to Entertainment Weekly last year:

Quint from Ain’t It Cool News, also a massive fan of The Dark Tower, saw some footage in late March, and said it didn’t look or feel like how it should be. And that’s not a nitpicking fan complaining about the film adaptation, but a fan saying they’re going in a completely different direction than the books. He said:

“I’ve seen this world so clearly in my mind’s eye that I’ve been dying to see someone bring it to life on the big screen since middle school… The studio showed a good 3 or 4 minutes of footage cut in a trailer form and it’s with a heavy heart that I say that the footage f–kin’ bummed me out.”

Make sure you read everything Quint had to say, because he explains that it’s not nitpicking about a lack of a ‘beat-for-beat’ adaptation, but The Dark Tower movie is tonally wrong from the books, and that’s based on just a few minutes of footage he saw to judge it. So of course, he and the rest of us need to reserve our final judgment until the film opens.

There are other worlds than these. Stephen King’s The Dark Tower, the ambitious and expansive story from one of the world’s most celebrated authors, makes its launch to the big screen. The last Gunslinger, Roland Deschain (Idris Elba), has been locked in an eternal battle with Walter O’Dim, also known as the Man in Black (Matthew McConaughey), determined to prevent him from toppling the Dark Tower, which holds the universe together. With the fate of the worlds at stake, good and evil will collide in the ultimate battle as only Roland can defend the Tower from the Man in Black.

The Dark Tower opens August 4, 2017. It stars Elba, McConaughey, Jackie Earle Haley, and Katheryn Winnick. Sony must feel pretty good to position the film in early August, which is usually the final great weekend of the summer box office.