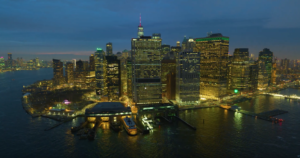 New York City is an iconic landscape for shooting aerial footage. The metropolitan background has amazing lights and details that draw the eye with every angle. But when you shoot it with three RED Weapon Monstro VV cameras and mash them altogether to get a 100 MP 12K image, even the city that never sleeps comes to life.

Think about that for a second. Filmmaker and visual effects artist Phil Holland was able to shoot New York City with an aerial camera array called the Shooter K1 Hammerhead and get an image that is nearly fifty times the resolution of 1080p! That’s like the next best thing to being there.

So how did he do it? Holland says that the K1 Hammerhead Aerial Camera Array is capable of carrying a trio of RED Weapon Monstro 8K VV cameras, all filming in concert. After processing and merging all three 8K video files, Holland ended up with a crystal clear 100MP motion picture image that has an equivalent sensor size of 645 Medium format film. That’s about as large format as you can get without going full IMAX. You get the point.

“Turning this large format concept up a notch by having 3X 8K VVs in the K1 Hammerhead seemed like a pretty logical and somewhat jaw dropping choice,” Holland writes on his blog. “RED released the Weapon 8K VV Monstro camera right around this time. And there we were, doing another first, putting 3X 8K VVs on their side and using them for the first time in a panoramic array setup to create a very high resolution and large format system. On a creative level I knew this was going to be good, Monstro’s strengths come in the form of great color, dynamic range, and very clean shadows. Which would work great for low light and night.”

Holland went on to add that in addition to laying out the RED Monstros on their side, he turned to Tokina and their cinema class primes, where were specifically designed for RED’s 8K VV format. “I’ve been using them a lot since their release,” he added. “Their clean performance at T1.5 maximum aperture would be ideal for night and since their image circle is generous we can use things like screw on ND filters without any visible vignette or coverage issues.”

Holland used a trio of 35mm primes in order to get as wide a vista as possible without severe image distortion. “Also, since they don’t breathe during focusing, stitching would be an easier task when adjusting focus from the eye,” Holland said.

… since 8K cameras have hit the scene I’ve been experimenting a lot with perspective correction to provide an even more unique perspective on aerials especially in cities with buildings, we can generate very high quality results because we have so much resolution at our disposal.

The workflow required stitching of all three images, and doing so with the thinnest overlap to get a workable image. Shooting the images on their sides in “portrait,” Holland was able to line up all three and the actual detail of shooting in 8K helped alight and stitch the image with a minimum of abberation, that would allow him to blend wherever necessary.

Holland says that while the ultimate destination was 8K import, he says that it’s best viewed within the range of 4-8K. But even on YouTube at 1080p the result is pretty stunning, visually.

For me personally, the image brought back memories of the Disney CircleVision Theater, where imagineers took 8 Vista Vision film cameras into a circular array and captured San Francisco from just about every angle. The result was repeated for Epcot Center in Walt Disney World, for the Canadian Pavilion. It’s one of my favorite cinematic techniques next to shooting in 70mm.

NVIDIA is taking the lead in creating high performance graphics cards that will future proof post production workstations for an 8K future. With the newly developed Turing architecture, post production is about to not only […]

Could Sony’s Next Mirrorless Camera Shoot in 8K? Maybe

The hottest camera rumor to hit the web last week is that the next generation in the Sony Alpha series will enjoy a massive 60mp sensor and be capable of shooting in 8K, and not […]