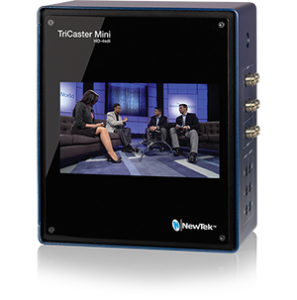 NewTek’s TriCaster really changed the way users could create broadcast quality presentations, especially on the Internet. If you’re a fan of Leo Laporte’s Netcasts, you know that he relies on the TriCaster to beam his million dollar tech empire all around the world. The Tricaster was built for the small TV producer or local internet broadcast in mind.

Newtek saw a need to bring a mobile component to the TriCaster line and the TriCaster Mini was born, a football-sized all-in-one TV studio designed to create your program anywhere. Pros are now clamoring for a higher-level model, and Newtek has responded with the HD-SDI model.

Dispelling the myth that it’s too complicated or expensive to produce engaging video content, TriCaster Mini integrates a studio full of production capabilities into one compact device, giving anyone the ability to mix live cameras with video, graphics, titles, and other sources, and create content that looks like professionally made television in minutes where traditionally it took hours or days. An integrated and configurable video screen on the side of the system also serves as a monitor for displaying a range of content selected by the user.  – NewTek 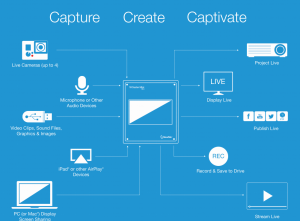 Designed as an all in one turnkey solution, the TriCaster Mini promises to help budding internet TV producers to create a TV studio setup in five minutes no matter where they are. Using basic camcorders that can shoot in HD or above, the Tricaster Mini, with a few lights and a green screen can give users the ability to be live on the air in minutes.

Shooters and producers can use their laptop, or even a Windows Surface Pro 3 tablet computer, and connect it to the TriCaster Mini Cube and be up and running in no time. With the unit, you can live video capture, mixing of multiple visual sources including multi camera support, overlay graphics, charts, lower thirds an animations, key out backgrounds for chromakey, live video calling, and more.

In addition to the TriCaster Mini  HD-4SDI, which allows for connecting professional video cameras via SDI. It comes in three different versions, including the Mini HD-4, which offers up to 750 GB of video storage and supports off the shelf HDMI cameras, and the HD-4i, which adds capability of prosumer cameras and provides storage of up to 1.5TB for playback and capture. All three offer built in switching, streaming, recording and publishing.

The TriCaster Mini HD-4 sdi is available immediately for $9,995 USMSRP. It includes an integrated display screen and system storage capable of recording approximately 30 hours of 1080i footage, per NewTek. An optional control surface is available for $2,495 USMSRP. International pricing will vary. For more information on all NewTek, check out www.newtek.com.