As Nikon announced their much ballyhooed Z6 and Z7 full frame mirrorless cameras, it quickly became apparent that the rumor mill was pretty close, if not spot on. But now that the light of day has down on the next generation Z series camera, the rumor mill couldn’t come close to convey just how downright beautiful this camera is.

Thanks to that larger opening, Nikon estimates that the BSI CMOS full frame image sensor will get 100% more light onto it than that of the sensor in the D850.  That’s possible since the flange distance between the lens mount and the image sensor is 65% shorter, measuring just 16mm. This equates to having over 90% of the available light cast upon the sensor, for greater low light performance.

The larger the lens mount also means that Nikon can offer even faster lenses with better optics, communications from lens to camera, and higher overall performance. And there’s plans for ultra fast f.95 prime lenses to take full advantage. Shooters can also use their F mount Nikkor lenses with the FTZ adapter with no loss of image quality.

From there, the two cameras begin to diverge. The Nikon Z7 is the professional grade full frame mirrorless model, which comes with a home built and designed 45.76MP BSI CMOS image sensor.  This is where the rumor mill got it wrong, thinking that the CMOS sensor was based on the D850’s sensor, but that isn’t the case at all. ISO settings range from 64-25600. 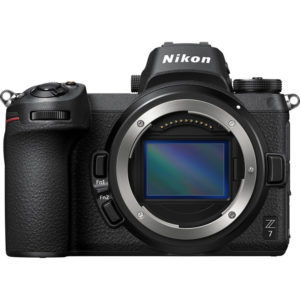 The Nikon Z7 chooses to omit an optical low pass filter (OLPF) in favor of achieving the best possible image sharpness and resolution from the sensor but, incorporates in camera five axis image stabilization, and over 493 focusing points. The Z7 can also shoot burst at up to 9 fps, and shoots 10 bit 4K video at 30fps.

Nikon also adds N-Log gamma for shooting in 4K video, and 8K time lapse. That’s right, in reality, the BSI CMOS image sensor is an 8K sensor, that downscales to 4K for the best possible image in ultra high definition. This seems to be the thing now, as camera makers put more pixels onto the image sensor, and then uses that to make a better image at 4K.

N-Log captures the flat looking image to maximize dynamic range. Other video modes include UHD 4K (3840 x 2160)ing either full-frame or DX crop (which has the advantage of full pixel readout), at 30p, 25p, or 24p frame rates. Full HD 1080p video recording is also supported at up to 120p for slow motion shots, and video files can be saved to the in-camera memory cards or as an uncompressed, 10 bit data over HDMI to an external video recorder.

Two shortcomings though, the Nikon F7 has only one XQD card slot (which seems odd for a pro grade camera) and the LCD screen is not tilt capable. 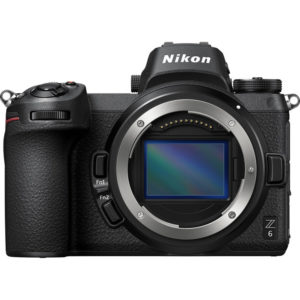 Meanwhile, the consumer grade Nikon Z6 is no slouch either, with a smaller 24.5MP FX Format BSI CMOS sensor. It has a lesser 273 point phase detect AF System, but can shoot burst modes at up to 12 fps. ISO ratings are higher from ISO 100-51200, and contrary to the Z7, the Z6 has a tilting touchscreen LCD. Sadly though, you can’t touch the screen to assign focus like in other models.

Preorder price of the Nikon Z6 is $1996.95 body only at B&H, or $2596.95 with the NIKKOR 24-70 f/4S kit lens. Expected availability for both cameras is September 27th. Amazon lists the same price here, and here with free shipping, but they estimate shipping a week later at September 30th.

How will Canon respond to this beefy, yet light, full frame mirrorless camera? Well, rumors are that we won’t find out until 2019.

Canon Wants To Get Serious on DSLR Video Specs

By James DeRuvo (doddleNEWS) Though Nikon had blazed the trail with DSLR video in the Nikon D90, Canon has often been credited by making the 5D Mk. II as the first mainstream DSLR video camera. […]

UPDATE: The Nikon Z6 will ship November 16th. Nikon really changed the game with their announcement of their Z Series full frame mirrorless line of cameras. But as they say, the proof is always in […]