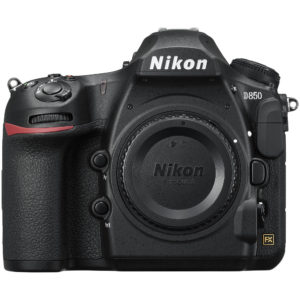 After weeks of spec-ulation (see what I did there?), Nikon finally made the D850 official. And you know what? Most of what we thought was true. And not only that, but camera geeks are stoked for what Nikon hopes will be their newest flagship DSLR.

So most of the specs that we have been writing about have once again been proven true. The Nikon D850 does come with a massive 45.7 CMOS sensor, but adds back-side illumination for the very first time for a crisper and more colorful image in low light situations.  And since Nikon has skipped the low pass filter in this design, the camera will be able to grab every photon of pixel detail and push it through. And to handle all that huge thruput of data, Nikon has beefed up the D850 with the next generation Expeed 5 image processor.

What is also confirmed is that Nikon can shoot 8K time lapses and 4K ultra high def video at 24 and 30 frames per second, or 1080p at up to 120p. The video is recorded in RAW with 4:2:2 8-bit color with external HDMI out, but can also archive that same signal to an onboard memory card simultaneously. While we’re there, the D850 captures 4K in H.264 to both the XQD (rest in piece Lexar) and an SD card slot. It’ll be interesting to see what Nikon plans to do about sourcing XQD cards since Lexar was the exclusive manufacturer of the card format. Here’s hoping that Sandisk picks up the flag moving forward.

Nikon is also beefing up it’s image buffer, allowing the D850 to shoot 51 images of 14 bit losses RAW image files or 170 images at 12-bit before having to write to the card. There’s also a “silent shooting” option that kinda turns the D850 into a mirrorless camera by flipping up the shutter and imaging directly to the processor. When it this mode, however, image framing at 6 fps can be done via live view through the camera’s pull out LCD, but that will lock the camera’s exposure and focus during the silent shooting process. But that’s kinda cool in that Nikon more or less give you two different cameras in one.

The D850 also has a cool feature called “Focus Stacking” of up to 300 shots. So you can shoot an image starting at a macro setting and then the D850 will adjust the focus incrementally out to infinity and then save those stacked photos into a dedicated folder where you can merge them together to get precise focus all around the image. Pretty cool for landscape photography, to be sure.

Other specs include illuminated buttons for shooting in low light, the pull out 2.1 million dot LCD touchscreen with .75x magnification, WiFi, Bluetooth, and Nikon’s SnapBridge mobile technology. But there’s no GPS if you’re into that. Battery life for the camera is rated at about 1,800 shots or 70 minutes of 4K video on a single charge, and the D850 can shoot image bursts of up to 7 frames per second, or 9 frames per second with the optional power grip.

But here’s where it gets interesting. The additional 2 frame boost is only available when adding a D5 battery, so that means that on top of investing $350 in the grip, $150 for the D5 battery, and the D5 charger will set you back $369. So you’re in for nearly $1,000 to get you that 9fps boost, and only you know if that’s worth the investment.  That’s on top of the $3300 price tag when it goes on sale next month.

The only thing that is really missing from what Jared “Fro Knows Photo” Polin calls a truly stacked camera, is that it will rely on Nikon’s standard AutoFocus. “I really wish Nikon had the Dual Pixel AF.” Polin laments, pointing to the one feature that the Canon 5D Mk. IV may have over Nikon in this design.  “But this may be a baby D5 for those who don’t want to spend $6800 to shoot weddings, portraits and sports. It’s the best camera for shooting, well, almost anything. There’s so much you can do with this camera.”

Nikon Gets into the XQD Memory Card Game

When Lexar closed its doors last year, Nikon was left with only one manufacturer of the heart of their DSLR and mirrorless camera lines … the XQD media cards. Former Lexar execs banded together to […]

By James DeRuvo (doddleNEWS) Usually, when a lithium ion battery catches fire, it’s an indication of a cheaply made, or even counterfeit battery that was bought online. But when a self-described major manufacturer of batteries […]