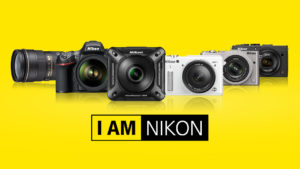 While the general consensus is Mirrorless Interchangeable Lens Cameras are just as good as DSLRs, sales figures show the once and future king’s shuttered design is still sitting on top. But that’s not stopping Nikon from announcing the development of a new mid-range mirrorless camera to go up against Sony and Panasonic.

“While details are confidential, we can say we are currently developing new mirrorless products that build upon Nikon’s strengths, and offer the performance prospective customers expect, including the ultimate optics performance, image-processing technologies, strength and durability, and operation.” – Kazuo Ushida

There’s not a lot of details, however, but Nikon’s president Ushida seems determined to carve out their own niche in the mirrorless market.  “We aim to be the top in a genre, and earn profits even if sales are down,” Ushida said. “For a smartphone generation, we put out a very Nikon-ish mirrorless camera which is superior to rivals in quality. Making the best use of industrial lens technology, we would like to overwhelm them in lens quality.”

Leveraging their considerable cache with high quality optics, Nikon seems to be making a move to offer another alternative to the higher to mid range DSLRs dominated by themselves and Canon. While Sony and Panasonic have been owning the mirrorless interchangeable lens market for years, Nikon can perhaps leapfrog them by offering support for Nikkor lenses. So, why not?  And mentioning the smartphone generation is interesting. It makes me wonder if the development here is something along the lines of converging several features into an app that will support the camera much like RED is planning with their Hydrogen mobile device.

But will Nikon be going head to head against Panasonic with a micro four thirds line? I rather doubt it. I think since Ushida is talking about optics performance building on Nikon’s strengths in the field while still keeping profits up in spite of a down sales year, it would make more sense to put out a full frame mirrorless camera that Nikon users can invest in as a B-camera knowing they can use their existing glass in the process.

On the other hand, an MFT lens line could add another revenue stream, but development costs would be higher. The takeaway here, is Nikon is not going gently into that good night and it seems when they cancelled their mirrorless camera a few months ago, it may have been in order to make room  for something with higher performance and sales allure. But it may be a good idea to avoid support of the XQD card since they just lost their exclusive manufacturer since Lexar closed its doors.

In other Nikon news,  Nikon has released a pair of firmware and software updates adding new features to the Nikon D5, as well as housekeeping fixes to it, plus the D500. Version 1.2 for the D5 adds two new autofocus modes, plus adding an EXIF tag for local time and UTC. There’s also added focus support for AF-P lenses, speeding up recording of data in long bursts, and more. Meanwhile, Version 1.13 for the D500 fixes an issue that caused unreliable wireless connections with the SnapBridge Android app.

The updates are available here:

This summer has been the season of the mirrorless camera, and it looks like it’s going to be heading well into Fall after news of Panasonic’s upcoming September 25th announcement, and Canon’s Mirrorless Announcement coming […]