Based on their latest round of GPUs, breathing new life into old towers with streamlined drivers, teaming up with RED, and now announcing a new app to max out video and graphic performance for content creators, it seems like Nvidia is putting their money where their mouth is. Something Apple would be wise to remember. 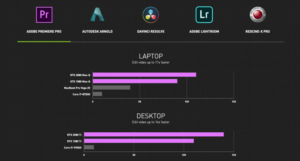 Designed specifically to super charge workflows for content video creators, Nvidia Studio dials in rending through the computer’s Nvidia GPU, so that the computer can render and process video effects faster, and with greater performance. The Nvidia Studio app also includes a new specification for RTX Studio laptops, which work in concert with RTX Quadro and GEForce video cards.  NVidis has also included real time support for RED Cine-X, which was announced last month by Jarred Land.

Nvidia says that the results are an increase in video graphic and editing rendering speeds by 20 fold, compared to Apple’s MacBook Pro running an ATI Vega 20 GPU.  In addition, Nvidia claims that Nvidia Studio will work to greatly improve pre-viz in apps like CineTracer. Check out this video posted by Matt Workman on Instagram –

Users will have to have a pretty beefy setup, however, to take advantage of Nvidia Studio’s high performance. At least an intel i7 and GEForce RTX 2060. Here are the specs:

If you need to upgrade your laptop, here’s a quick breakdown of NVIdia Studio RTX Laptops which will be coming out this summer:

Watch the entire Nvidia presentation below:

By Kevin P. McAuliffe In our previous lesson of our look at learning BlackMagic Design’s DaVinci Resolve, we starting talking about color correction, and discussed the Waveform monitor, and how you can use to to […]

By Kevin P. McAuliffe In our last lesson, in our look at learning DaVinci Resolve, we talked about doing a basic color correction in using the Color Wheels.  In this lesson, I want to move […]