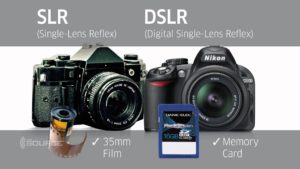 When the digital revolution took the creative realm by storm, perfectly good 35mm cameras were left collecting dust, or worse, relegated to forgotten bins in thrift stores, where you could pick them up for a song. But a photographer has created a digital back that will breathe new life into those old cameras again.

Aptly named “I’m back,” this digital back works with single lens reflex cameras that are specifically designed with a slide off back that leaves the bottom of the camera exposed.  The camera back is the second generation that the back’s creator Samuel Mello Medeiros has been working on since 2016.

The back has been tested with various analog SLR cameras including the Nikon F, Nikon F2, Nikon EM, Nikon S2, Olympus OM10, Praktica B200, Yashica JP, Seagul, and Leica M2. Medeiros says on the project’s Kickstarter page that the back could be used on other cameras so long as it has a 1/4-20 tripod mount, bulb feature, sync flash, and can operate with the door open or removed. The camera’s sync flash port connects the back to the camera itself.

The digital back contains a Panasonic 16MP CMOS  image sensor and a focusing screen which then transmits the data from your SLR’s lens assembly for processing and writing to an SD card.  The sensor is capable of recording 2K video in H.264 at 24 fps, or 1080p video at up to 60 fps. It includes a small LCD screen for adjustment of menu settings and reviewing any stills or videos shot and saved with the back. The back also interacts with a smartphone app for doing many of the same functions.

To attach the digital back, you simply remove the back of your camera and connected I’m Back, securing it with the tripod thumb screw. Then, the adjustable focusing screen can be maneuvered to make the image sharper based on each camera’s individual design.

The one thing about it though, is that you must set the camera to bulb and then trigger the shutter for 2-3 seconds to take a still image. So there is some what of a latency involved. I’m also assuming that the video works by keeping the shutter depressed for the amount of time you’re recording as well.

The images are really quite impressive considering the kluge like nature of the back’s design. There is a vignetting effect but Medeiros says that by using faster lenses with aperture ratings of f1.2, 1.4, 2, etc., you can minimize the darkening edges of the vignetting, or remove them altogether.

Currently running a Kickstarter campaign with about 40 days to go, you can back the project and get a fully assembled I’m Back for about $207 (€175).  There’s also a build your own kit version for those who love to tinker. Check it out here. If funded, I’m Back will be available in the Spring of 2018. Plenty of time to rummage through that camera bin at the local thrift store!

Now granted, you’re not going to be turning in your Nikon D850 or Canon 5D Mk. IV for this concept. And the simple fact is, that if camera makers could have, they would’ve adapted their 35mm and 70mm cameras a long time ago to shoot digital video. But developing an independent digital platform probably was faster and easier than fitting a square peg into a round hole. But I can easily see filmmakers using “I’m Back” connected to an old SLR to get that 16mm or Super 8 look for creating of newsreel type footage or a home movie look.

By James DeRuvo (doddleNEWS) While Sony, Panasonic, and even Canon dominate the run and gun digital video category with their DSLR and Mirrorless cameras, not very many people know that Nikon pretty much blazed a […]

Last year, camera rental and sales reports indicated that shooters are preferring mirrorless cameras over DSLRs for the very first time.  That, coupled with the excitement brewing over both Canon and Nikon’s upcoming full frame […]