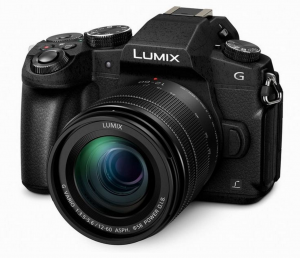 Panasonic is introducing a new member of the Lumix G series of mirrorless cameras with the DMC-G85. This new camera with an interchangeable lens option, packs plenty of features, including 4K video and a 5-axis image stabilization system, all in a DSLR-type format. The best part? The price is only $999 with a micro four thirds 12-60mm kit lens.

The stabilizer in the G85 is dubbed the Dual IS 2 and is an upgraded version which Panasonic says will be even more effective at suppression against blurring. The new gyro sensor better controls both the 2-axis Optical Image Stabilizer and the 5-axis Body Image Stabilizer which apparently will even work in low-light telephoto situations.

The new camera boasts a 16.0-megapixel Digital Live MOS Sensor with an anti-aliasing filter and the new Venus Engine. It also features a new electromagnetic drive in the shutter unit combined with a solid magnesium front panel which promises to keep the camera ultra-quiet. You could also use the electronic shutter where there is no shutter movement at all but can cause flicker issues.

Buffer-wise the new G85 will allow you to shoot in continuous mode at 9fps with the auto exposure and autofucs locks turned on. This allows you to capture up to 45 RAW images or 300 JPEGs in a single sitting. You can also take advantage of the 4K technology built in to the camera to photos at 30 fps in the equivalent of 8-megapixel resolution images saved as a 4K PHOTO.

For the videographer, the Lumix G85 will record UHD 4K video in (3840×2160) in either 30p or 24p and is also capable of recording 1080p footage at 60p captured in MP4 format. You can also output real-time image in 4:2:2 / 8-bit to an external monitor and/or recorder via the built in HDMI port while simultaneously recording video.

Other features for the camera include wireless connectivity via Wi-Fi; new exposure, white-balance, focus, and aperture bracketing; an electronic first-curtain shutter which can be used for shooting at a shutter speed up to 1/2,000th of a second; and Power Saving LVF which Panasonic says will be able to extend shooting to approximately 800 images per charge.

The Panasonic DMC-G85 is available for pre-order now via B&H [affiliate link] at just under $1000, including the 12-60mm kit lens, and is expected to ship later this month.

Here are the major highlights of the Panasonic Lumix G85: