We’ve been hearing about ISO since the film days (when it was called ASA). Since it refers to the speed at which film, or an image sensor gathers the light that shines to it, ISO has been one of those crucial tools that filmmakers and photographers can use to adjust how their image looks. But one filmmaker/photographer on YouTube says that ISO is a false value in our digital camera world, and it’s creating quite the debate. 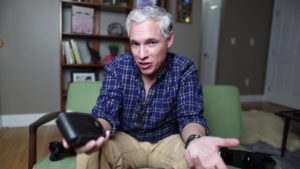 The photographer in question is Tony Northrup, and on his YouTube channel, he published a video entitled “ISO Is Totally Fake. Seriously” In it, Northrup argues that camera manufacturers publish made up ISO ratings for their digital cameras, some of which amount to a complete guess, and they do so, only because it’s an expected value that we all want to see. In reality, Northrup says, today’s digital cameras are ISO agnostic, and you can shoot your image at any ISO setting, even it if’s pitch black, and then adjust it up to five stops in post, and not see much of a difference. Northrup argues that’s because ISO doesn’t really change your image in the same way that aperture and shutter speed do, which controls the amount of light hitting the sensor.

I have to say, Northrup makes for a compelling case, especially when you see him shoot a shot at ISO 3, and then use Adobe Lightroom to raise the light values five stops and get a workable image that looks nearly identical to his control image shot at ISO 400. Northrup says that the low ISO rating of a sensor may be legitimate, but largely irrelevant. And the higher ISO is completely made up with math, in order to address the multiplication problem that presents itself when shooting in lower light situations.

But you see that graphic above? Northrup’s other point is that ISO ratings vary widely from camera to camera, and that the manufactures don’t use the ISO standard as they should. Which leads to inaccurate readings. So Northrup’s point is, that at the end of the day, ISO ratings are fake. Or at the very least useless.

But it’s prompted a backlash from a few other photographers on YouTube including Lee Morris of Fstoppers. Morris found, by comparing a 15 year old Nikon D1H and the Nikon D850, that he found the exact opposite results, as ISO 400 would show a 1 stop difference, acting like ISO800. He also found that while the images at the extreme ends of the ISO were very similar after post processing, to the trained eye, they weren’t identical.  There was sensor dust in the dark areas of the frame, and some color noise. Adding gain at the software level was close, but no cigar.

Then photographer Dave McKeegan took it to the next level by saying that Northrup is “spreading misinformation to those who don’t know any better.” McKeegan says there is much more visible noise and that Northrup really doesn’t understand how a camera captures an image. Here’s his reaction:

Now this is all inside baseball for most people. But when we’re shooting video, or even still images, understanding just how ISO works and how far we can push it, is a vital tool in our quiver.

What do you guys think? I have to ruminate on this for awhile before I come down one way or the other.

By James DeRuvo (doddleNEWS) Spending time on set is really like taking a master’s class in filmmaking. Not only are you learning from people who have more experience than you, but you can pick up […]

The hits just keep on coming for YouTube. Still reeling from last year’s so-called “Adpocalypse,” and the latest scandal over blackmailers abusing their copyright claim system to extort money from content creators, the online streaming […]

By James DeRuvo (doddleNEWS) When you’re trying to take on an 800 lb. gorilla like YouTube, it’s generally not a good idea to place storage restrictions on the content they wish to upload. Some think […]