We’ve been hearing a lot about a new DJI Phantom 5 drone coming soon, with its hallmark feature being an interchangeable lens system. But now we’ve got photo evidence. And not only that, but the drone has a redesigned rotor system as well.

7 months ago, I said that the next generation of Phantom series would be equipped with interchangeable lenses. Now it’s CONFIRMED! – OsitaLV

The evidence comes from drone watcher OsitaLV’s twitter feed, which shows a pair of what looks to be Phantom prototypes, with the interchangeable lens camera system suspended underneath. This supports the original drawing concepts that OsitaLV leaked a few months back, which showed a series of lenses that DJI would offer, including 15mm, 24mm, 35mm and 50mm, all with an aperture speed of f2.8. The camera itself is believed to have specs that include a 1″ CMOS sensor.

As for the drone itself, the rotor section looks to have been redesigned to be waterproof, so that the drone will be able to spend more time in inclement weather. OsitaLV notes that the cooling holes have been moved to the underside of the drone boom, to keep water out of the rotor engines, while still keeping them cool. The battery compartment has also been sealed tight with o-rings to keep the Phantom’s delicate electronics water and dust free.

The Phantom 5 looks to also have a beefed up obstacle avoidance system, with sensors above, below and on all four sides of the lateral axis. This six position censoring system should enable the Phantom 5 to not only avoid trees as it’s flying, but also any obstacle above or below the drone that the pilot cannot see through the drone’s live view system.

Other specs leaked include:

Still no word on when the Phantom 5 will be available, but drone enthusiasts are already preparing themselves for a serious price increase, to reflect the cost of not only the interchangeable lens system, but the lenses themselves, which could fetch as high as $700 a piece. 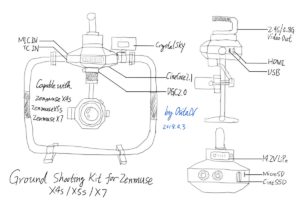 OsitaLV also leaked a pair of concept sketches that indicate that DJI is working on a new cinema camera contraption that would take the Zemuse camera and gimbal from the DJI Inspire 2, and enable it to become a 3axis handheld gimbal.  OsitaLV is calling it the “Ground Shooting Kit,” and it looks to come with a handheld gimbal handle, ala the Ronin S , as well as a two handle setup, and a FigRig style cage.  It will be compatible with Zenmuse X4s, X5s, and X7 camera systems, come with both HDMI and USB ports, as well as WiFi compatible and Crystal Sky monitoring. The battery will also serve as the main hub for the camera system, with microSD and CineSSD slots to record with.  He also speculates that the CineSSD Shell will house a Samsung 960Pro SSD drive and shoot 14bit Cinema DNG and ProRes Raw in HDR.

“If they really get this thing into market, it will be a good news for film maker who has Inspire 2,” OsitaLV writes.

We’ll just have to wait and see when these devices get beyond the prototype/testing and hit the market. But OsitaLV was pretty spot on with the DJI Mavic Air, so it’ll be exciting to see if they do.

Hidden in the 600 page FAA Reauthorization Act for 2018 is a key provision called “Preventing Emerging Threats,” which grants any federal agency the authority to shoot down private drones that are deemed a “credible […]