In tutorial 73, we talked about creating a dreamy glow visual effect. Today, let’s take a look at how to manipulate your stereo audio to make it two separate mono channels. Some cameras have 2 audio inputs and it is quite common for those inputs to be recording audio from 2 separate sources. For example, I often film with a directional mic on the camera into input 1 and a radio mic into input 2.

Now, the problem with that is that unless you separate these 2 audio channels BEFORE you use them in a timeline, Premiere Pro will see them as a Stereo pair and so adjusting one will affect the other. This means that if I try and turn down the directional mic I end up turning down the radio mic and vice-versa.

So, how to we change these tracks to mono so we can edit each channel independently?

Method 1: Changing them after importing clips into your project panel.

This is done by right-clicking the clips you wish to change BEFORE ADDING THEM TO THE TIMELINE to get the following menu. 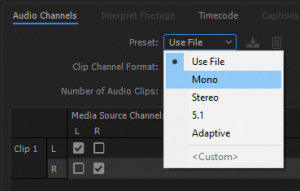 Hit ok and then, when you add that file to your timeline, the audio will come in as 2 separately adjustable audio channels.

Method 2: Do this for the whole project through your Preferences.

Select Edit>Preferences>Audio (PC) or Premiere Pro>Preferences>Audio (Mac) then look for the ‘Default Audio Tracks’ section and in the ‘Stereo Media’ drop-down select ‘Mono’. Now, all stereo media you import after making this change will have the audio split into 2 independent tracks. 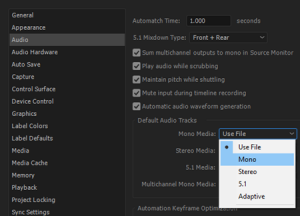 By Andrew Devis (doodleNEWS) It’s time to wrap up this four-part series on the Premiere Pro Tube-modeled Compressor. I’ll discuss the manipulating the Attack level. The last part of this effect to discuss is the […]

If you’ve been using Transcriptive to create transcripts of your videos in Adobe Premiere Pro CC 2019, Digital Anarchy is warning that there’s a serious memory leak in the Transcriptive Premiere Panel for videos over […]

By Andrew Devis (doodleNEWS) With the audio tools in Premiere Pro CC 2017 being so much better than before, you may be excused for wondering why you may still want to send your audio to […]