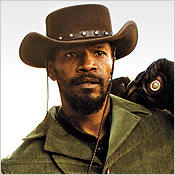 This will be the first time the filmmaker has worked on a comic book, which will see him team up with some of the best in the business including Matt Wagner, who will write the finished draft, after developing the story with QT.

Here is what the Pulp Fiction helmer has to say about the project, which will be co-published by Dynamite Entertainment and DC.

He said (via THR):”I’m very very excited about both this story and the opportunity to work with Matt. It was reading his Zorro stories that convinced me what a good idea it was to join these two icons together.  And the story idea we came up with is thrilling, and I think will be an exciting new chapter for both characters.”

While Tarantino’s use of the word icon to describe Django, alongside a legendary character such as Zorro, may seem a tad ridiculous, I have no doubt that this is how the Oscar winner views his own character.

When Django Unchained, starring Jamie Foxx and Christopher Waltz,was released the director described how he imagined the titular character as a classic hero, like those featured in serials such as Zorro or the Lone Ranger.

Indeed, Tarantino probably has a whole Django mythology mapped out in his head, so when he uses the word icon, this isn’t just misguided enthusiasm, he actually believes it. And that’s exactly why he is a double Academy Award winning screenwriter.

The Django comic is set for release later this year, although no date has been confirmed yet. Stay tuned for more Tarantino news.