Blazing the cinematic trail has always been the hallmark of RED, and fire chief Jarred Land just relishes the first strike capability he has when it comes to cameras. Now he’s turned the industry upside down again, announcing that HELIUM is shipping and the RED EPIC finally gets weaponized.

“From the very beginning, we’ve strived to not only develop the best imaging technology on the planet, but also make it available to as many shooters as possible. The WEAPON remains our premier camera — and now comes with the option to either go with the 8K HELIUM sensor or 6K DRAGON sensor.” – Jarred Land

The HELIUM platform has been grabbed headlines a few months back when Land offered to sell 20 prototypes to his faithful cadre of filmmakers on the RedUser Forums. RED Users bought out the supply in under 20 minutes, leaving others to wonder when more would go on sale. Even Michael Bay received a special version to film Transformers: The Last Knight.

“Since we began shipping the EPIC in 2010, it has been the workhorse camera of the industry. Our latest camera, the EPIC-W, continues that legacy and features our current-gen DSMC2 form factor as well as the 8K HELIUM sensor.” – Land 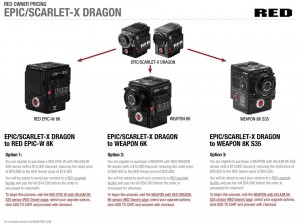 Now, Land has announced that not only is HELIUM shipping to the masses, but it’s doing so with two different camera platforms, the RED EPIC-W and the straight up Weapon 8K platform. 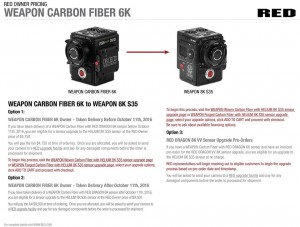 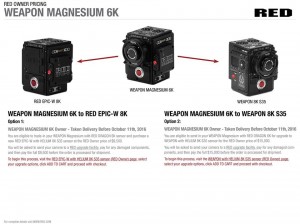 But in addition to these two, Land also laid out upgrade options for existing RED cameras including RAVEN, that start at $14,500.

Carbon Fiber 6K DRAGONS can be upgraded to HELIUM for $4,750, if you bought the camera before October 11th, after that, it’ll go up to $9,500. Or you can upgrade to the 8K Vista Vision sensor, but the cost of that upgrade is not advertized at this time. 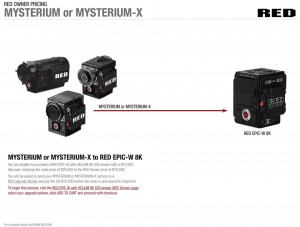 RED Magnesium 8K users can upgrade to the EPIC-W with HELIUM sensor for $9,500 by trading in your old camera, or buying a new one outright for $15,000.

RED Mysterium and Mysterium-X users can now upgrade to HELIUM for $19,500, which I think essentially means you’re trading in your old RED for a new EPIC-W. 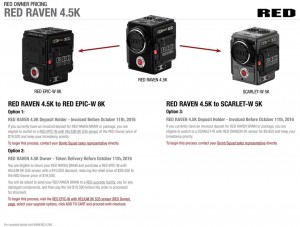 All upgrades will require prepayment up front and sending in your rigs to a RED Upgrade facility for processing. More on RED’s upgrade policy can be found at RED.com.

WOW. It’s pretty clear that RED is doing everything they can to get their clientele into the DSMC2 platform, in preparation for what lies ahead. How exciting! It’s a good time to be a RED shooter!

RED has announced that thanks to their partnership with NVidia, their latest RED Cine-X Pro Software for Windows has come out of Beta and is ready for prime time. And what that means is, the […]