RED is getting into another partnership for use of their codecs and workflows, this time with a deal that will bring their Raw codec to bear on Atomos line of high end external monitor-recorders. Effectively ending a patent dispute that marred users from being able to enjoy the best of both worlds, shooting on RED, and recording on Atomos. And the future of integrated products looks bright.

“Atomos and RED are now further aligned to make more advanced video recording technology more affordable with no compromise to creative freedom. RED have always been at the forefront of digital cinema technology and propelled the industry forward at an astounding rate. We are excited to be able to now work closely with RED, not only by utilising some of their key intellectual property, but in joining forces with them on future products.” – Jeromy Young, CEO Atomos

The simple fact is, while the announcement was a surprise to everyone, it offers little in the way of details on how the partnership will work.  What we know is that the agreement between RED and Atomos covers royalty based licensing with “certain RED patents” for recording and playback of two video codec standards used in Atomos products.

In doing so,RED and Atomos avoid a nasty and drawn out legal battle by coming to an arrangement to record with REDCode Raw through Atomos Products with a royalty based license. Moreover, both companies hint at developing future products so that both can take advantage of system integration.

“We welcome the new relationship with Atomos and feel that their innovation combined with our patented technology should fuel broader adoption of 4k and above, content creation. We are looking forward to what the future holds for our partnership.” – President of RED Digital Cinema, Jarred Land

The notion here is that RED camera users will be able to use Atomos External Monitor-Recorders, and be able to record in RedCode Raw or ProRes Raw, or both, and then outputting them to their NLE for post production workflows without having to go through the tedious process of re-encoding the footage. ProRes Raw, however, can only be edited at the moment in Final Cut Pro X, so Adobe has to get on board for Premiere users to be able to natively use the codec. They can, however, work with RedCode Raw across the board for resolutions up to 8K.

According to RedShark, the agreement is going to open up a kind of “virtualization” that will enable RedCode Raw to be processed and written to third party recorders from Atomos, while the processing is handled by the brain of the RED platform. Or vice versa. It’s a kind of mashup of technologies, which handle royalties, rather than creating enclosed and sandboxed architectures to hem users into a set ecosystem. 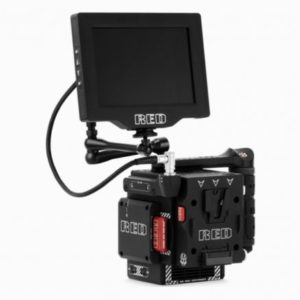 In other RED news, RED announced a new RED Touch Ultra Bright 7 inch monitor which will support DSMC2 accessories through a single cable for power and signal transmission. The RED Touch Monitor offers 332 pixels per inch, a 1200:1 contrast ratio, 2200 nits of brightness, and a 1920×1200 resolution.

The RED Touch 7″ DSMC2 Ultra Bright monitor is available for Preorder for DSMC2 platforms, including the RED Epic-W, Weapon, Gemini 5K, Monstro 8K and other DSMC2 cameras. It sells for $3750 at RED and B&H. Shipping late February.

By James DeRuvo (doddleNEWS) When you’re creating a game changing technology that will open up new genres for filmmakers to mine, the specter of delays is all but inevitable. Already faced with holding up the […]