RED has announced that thanks to their partnership with NVidia, their latest RED Cine-X Pro Software for Windows has come out of Beta and is ready for prime time. And what that means is, the rest of us can get into an 8K workflow for an affordable price. 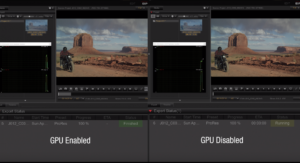 The main idea here is that RED R3D files will now be encoded using GPU processors, rather than the computer processors that R3D has relied on in the past. That required higher end machines that cost tens of thousands to handle the 8K workload.

RED Fire Chief Jarred Land has been trying to bring REDCode Raw to all platforms for nearly a decade, and he’s thrilled that by working with NVidia, RED can now be used by more than just higher end cinema applications. “Once you take that card out and put it into a computer, fighting to get real time playback was always a struggle,” Land said in a recent talk. “We made the Rocket because we had to do it, and the Rocket-X was more expensive. But at that time, we had to do it.” Land then added that once NVidia stood up to help break the logjam, the end result of using NVidia GPUs to do the work came in a matter of months. 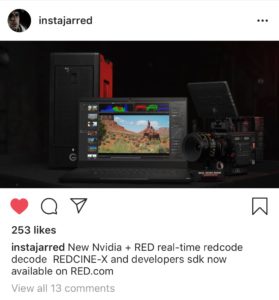 Users will no longer have to rely on expensive RED Rocket GPU cards to handle the unpacking of the files before playback, which  admitted was a stupid and expensive solution that had to be created at the time. Now, those days are behind us. The best results can be achieved on NVidia’s Quadro RTX cards, but thanks to NVidia’s CUDA processing Titan, and even higher end GEForce graphics cards can offer manageable 8K workflows in real time for playback and transcoding.

Obvious benefits to this new hardware/software application for your workflow include:

And that’s only the beginning. By announcing the availability of the Red Cine-X Pro SDK, RED and NVidia hope to bring editing and other applications to the NLE of your choice in the near future.

Here’s the latest on the RED Cine-X Build:

Unfortunately, Apple users are mostly left out in the cold for this development, since the Apple platform relies on AMD GPUs. But Land came up with a workaround about two years ago, thanks to an update to NVidia’s drivers. He simply blew the dust off his old cheese grater MacPro from 2010, and gave it an upgrade. It wasn’t cheap, but it was workable. Check that out here.

So now that RED has removed a major barrier for content creators to shoot on the RED 8K platform, how many of you are going to give an 8K RED workflow a go?

By James DeRuvo (doddleNEWS) Rummaging around in my media card case, I see a 128MB SD media card. Not able to do much these days, except plug into one of my digital picture frames, that […]