Hard drive sizes. It’s a strange mix of actual storage space and traditional marketing.That’s usually because they do some fancy math to state that a drive has a capacity of, say 512GB, which they arrive at by counting every available bit of space on a drive, but that doesn’t account for the software used to manage the drive, or how the drive gets smaller with formatting. We all know this. But when RED gets accused of fraud, saying they use custom built RED Mini-Mags only to discover they are using off the shelf mSATA SSDs and a simple controller, well, that’s where things get a bit complicated.

RED claims they “invented” the RED MINI-MAG device, and they developed their own IP and SSD firmware for it, and that RED MINI-MAG has significantly less card errors than other companies using even reputable generic media, (and so theirs is superior to a generic one) and RED spends millions of dollars testing, certifying and QCing every media they ship. Red claims the RED MINI-MAG device is made in USA. RED also claims that (as of March 2017) RED MINI-MAG is a patented technology. 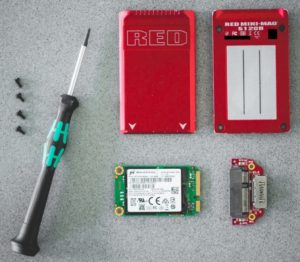 The controversy reared it’s ugly head when Bruce Royce, the founder of a UK company known as JinniTech decided to break down the contents of a 512GB RED MiniMag to see just what proprietary parts and details were inside this expensive media card that RED sells for $1850. That’s expensive, but it’s RED, and we all know that RED uses some serious secret sauce, including exhaustive testing to make sure the miniMag is the most reliable media card on the market. Plus, it’s also made in the USA, so they’ve got that going for them. Or is it?

a 480gb card that has provisioning is still indeed at it’s base a 512gb card at chip level.  Kingston explains this here https://www.kingston.com/us/ssd/overprovisioning – Jarred Land

JinniTech discovered when they took apart the MiniMac, that there was a standard mSATA SSD card, that was designed and built, not by RED, but my Micro/Crucial! The m500 mSATA SSD that is inside the 512GB MiniMac is only a 480GB card. This isn’t a matter of a 512GB card that has had some of it’s space gobbled up with formatting, or special firmware files to manage it. It appears to be a plain  480 GB card. And that means it’s even smaller in usable space. I’ve never been a fan of the fuzzy math that drive manufacturers use to make their hard drives and cards appear larger than they really are. Why not just give us the usable space so we know what we’re really getting? But it’s fairly common knowledge and has been for decades. So it’s really nothing scandalous. In fact, it’s old news. It’s just annoying.

Also, to make matters worse, Jinni claims the controller for this mSATA mSSD is a cheap $6 model that anyone can buy. According to be JinniTech, RED is selling a Crucial M500 mSata SSD for $2500, when it costs 10 times less.

On top of that, Jinni says that according to the manufacturer label, the m500 mSATA SSD is a consumer grade MLC (multi level cell bays), not a custom built SLC (single level cell bay) card. The cards are also built by Micro in China and is available to the public. Jinni says the camera’s firmware uses software trickery to make the card appear to be 512GB in the camera menu, but if you look closely in the video, it says just under 480GB of space available. So they aren’t really telling the truth.

Jinni Tech then sought to prove this by replacing the RED MiniMag mSATA with an off the shelf Crucial mSATA card and then installing it into the RED. Would the camera reject it? Not at all. In fact, it read it perfectly and indicated it was a 512GB card. It even indicates the standard Micro firmware of MU03.  He then connected the same Crucial card to his PC, and it read as 480GB. He even replaced the firmware with Micron’s newer firmware version MU05 using a utility by Micron, and then plugged it back into the RED. Ideally, this should cause the card to fail. But it read it just fine.  Then again, he offered no test footage to show how said card would actually perform, just that it could be read. 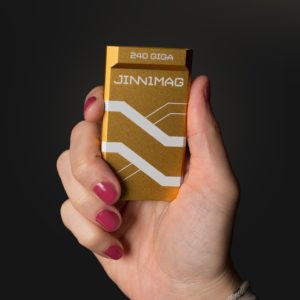 Jinni Tech has a financial motivation here. They’re offering their own version of the MiniMag, which they call the JINNIMag starting at about $500 US for the smaller 240GB models. But users run the risk of throwing their money away if RED can easily issue a firmware update to block third party cards.

Jinni’s argument that RED has not developed its own IP and firmware is preposterous. RED built and ecosystem of IP around its REDCODE technology. This ranges from the sensors to cameras to software, and includes the recording media. All aspects of the RECODE ecosystem are patented.

What does RED have to say about the controversy? In a rather lengthy statement to Cinema5D, Land tells the history of RED’s dealings with Jinni, including a legal action for patent infringement. The case was eventually dropped by RED, citing Jinni’s financial condition not making it worth pursuing.

Jinni next takes issue with the fact that I stated that our cameras write differently to our Mini-Mags than normal SSDs are used to. This is 100% true. Not all SSD can handle the REDCODE workflow. We have tested over 100 SSD and media components over the years, and most do not have the sustained performance to pass our criteria.

Land also doesn’t dispute that RED cameras write differently to the cards like Jinni accuses. In fact, he confirms it. But he then goes to  mention that the REDCODE workflow was tested with over 100 varieties of cards, with varying results. Meaning that not any mSATA card can handle the sustained performance of the REDCode workflow.  In fact, Land points out that the lower cost JinniMag failed when tested under these conditions.  “When we opened (the JinniMag) up, it was using an SSD we knew to cause failures,” Land states. “And when we tested the card, it indeed did fail after filling past 60% of capacity. We would never use such media because if media fails on a shoot, our users all suffer,” Land adds.

Land also disputes the claim that RED brags of making their own cards, calling it bizarre. “RED Mini-Mag housings are easily opened and as many have done in the past (mostly out of curiosity) they have opened them to peek inside. We leave the manufacture name and model number on the SSD’s in plain sight because we are not trying to hide anything,” Land says. Land also points out that “Made in the USA is more a country of origin statement.

You can read the entire statement in the Cinema5D link above, but it seems to me that someone is trying to make a quick buck at REDs expense. Are the MiniMags expensive for what’s under the hood? ABSOLUTELY. But there’s more to RED products than just the physical parts they use to build them. RED offers the expertise, higher testing standards, and a criteria that insures that only the perfect cards make the grade. As he stated above, to do anything less means that users will suffer failures at critical times. RED even offers media recovery for no charge.

Will Jinni be able to offer the same quality support should a card go bad? I don’t think so. But it is interesting that RED is planning to lower the price of the MiniMag next week, months ahead of schedule.

RED Celebrates A Decade Of MYSTERIUM

By James DeRuvo (doddleNEWS) When you think about milestones and RED, you’d expect to see great fanfare. But they didn’t even put out a press release. Instead, in celebrating the tenth anniversary of their MYSTERIUM […]

By James DeRuvo (doddleNEWS) One of the best kept secrets out there is that sometimes older lenses are better. Whether it’s those classic anamorphic lenses that Quentin Tarantino used for The Hateful Eight, or that […]