How many times have you seen  cool visual effects in the movies that cost millions and thought “I wish I could do that.” Well, Red Giant Software is launching a new series on YouTube with the goal to do just that … teach you how you can mimic those great visual effects.

Ever since I was a kid, I’ve loved seeing imaginations come to life through visual effects on the big screen. When I went to see ‘A Wrinkle in Time,’ I couldn’t help but think about how many of the effects could be pulled off right at home using some of Red Giant’s tools. With a little planning, it turned out to be even easier than I imagined.” – Dan Hashimoto, Action Movie Dad 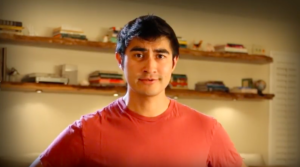 The new YouTube series is called “Cheap Tricks” and it is the collaboration of RED Giant Software and former DreamWorks Animation special effects guru Dan Hashimoto, who was the head of 2d compositing for How to Train Your Dragon, and Kung Fu Panda 2&3.  Dan has a popular youtube channel called “Action Movie Kid,” which is about his three year old son’s playtime, with some visual effects added to show what happens when a kid’s imagination comes to life. With his son drawing a chalk drawing of a UFO that comes to life and flies away, to battling his sister and her Ghostbuster’s Proton pack with his light saber, to what happens when he gets hold of a real portal gun.

“I’ve known Hashi since he was an animator at DreamWorks and have always admired both his natural curiosity and his intense love of visual effects,” says Aharon Rabinowitz, Red Giant’s Head of Marketing. “He has an uncanny ability to take on a challenging VFX shot, and to turn it into a unique experience where both the process and final result are incredibly fun. We’re excited to share his process for creating Hollywood motion graphics and VFX.”

The channel has over 375 million views and a million followers, giving Hashi a great following of Action Movie Kid‘s adventures. So it makes sense that Red Giant Software would want to join forces with Hash to create the Cheap Tricks series and show us how to do all those cool effects we see in blockbuster films using RGS software.

Get ready to learn a ton about visual effects and motion graphics in Cheap Tricks – a new tutorial series from Red Giant and Daniel Hashimoto (creator of Action Movie Kid). Each month Hashi will show you how to quickly and inexpensively create Hollywood Blockbuster-level VFX and mograph by breaking down shots from popular films and trailers.

Every month, RGS will have a new episode showing us some cool tips and tricks from this master of visual effects. Episode 1 examines the effects from Disney’s “A Wrinkle in Time” and explains how you can use plugins like Trapcode Particular, Trapcode Mir, Magic Bullet Looks, and Red Giant Universe to recreate the shimmering wrinkle in time, the shattered glass like refractions of the movie’s titles, and how to transform stock images into an otherworldly alien landscape.  The episode also features Lyric Wilson, who reprises her role as Young Meg in the film.