Undeterred by several delays and the lackluster reception of their innovative Hydrogen One smartphone system, RED’s Jim Jannard has announced the development of the second generation Android device with a redesigned camera module and an improved photo sensor.

In addition to completely redesigning the phone from the ground up, along with the image sensor, Jannard was candid about the manufacturing issues they faced trying to bring their game changing 4v smartphone to market. While RED is known for building and assembling their cinema cameras in the United States, Jannard admitted on the Hydrogen User Forum, that due to the complex and competitive nature of the smartphone manufacturing business, making a smartphone in the USA simply wasn’t feasible. To that end, they chose iPhone manufacturer FoxConn and an OEM manufacturer in China to handle the heavy lifting. That soon proved to be untenable, as Jannard mentions here:

While Foxconn has been fantastic, our ODM, which was responsible for the mechanical packaging of our design, including new technologies along with all software integration with the Qualcomm processor, has significantly under-performed. Getting our ODM in China to finish the committed features and fix known issues on the HYDROGEN One has proven to be beyond challenging. Impossible actually.

After several delays, the phone was finally launched and met with some tepid reviews. But still, after holding the phone in my hand and seeing the 4v holographic interface, I can see where RED wants to take the industry, and it’s in an exciting direction.

The HYDROGEN Two is being methodically designed and crafted to surprise and exceed expectations… again, just as you would expect from us. 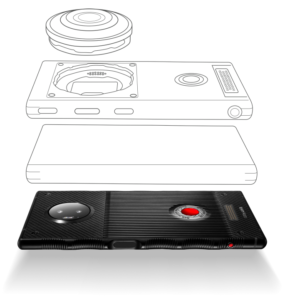 To that end, RED has been vetting a new manufacturer and ODM and has found one that they are confident can handle the load. Additionally, RED has moved the management team in-house, led by Fire Chief Jarred Land. Jannard is also hiring some top level designers to rebuild Hydrogen 2 from the ground up.

Jannard says that since then, they have redesigned the camera module (dubbed Komodo) in house and now they have a brand new image sensor to meet the standards set for Hydrogen 2.  The good news is while Hydrogen 1 users won’t be able to upgrade, Jannard promises that they will be given preferential treatment on both pricing and delivery allocations for Hydrogen 2.

When will it arrive? Only time will tell. But it sounds like RED has emerged from a tough growing season and is ready to take the next step. Such is the challenge of entering a new market, even doubly so when you’re looking to disrupt it at the same time.

Mobile filmmaking is starting to hit the mainstream, and as such, the iPhone is becoming just another tool in a filmmaker’s arsenal to tell a story. Now of course, FiLMiC Pro and Moment have the […]