With hints that their next cinema camera will be smaller and lighter RED’s Jarred Land previewed what he’s calling the KOMODO camera, and it looks to be more mainstream with CFast, support for Hydrogen and even an RF Mount.

Between my Komodo Cfast photo last week and Jim’s reference in the Hydrogen thread there has been a ton of speculation of what Komodo is, and it sure is fun to watch imaginations run wild. – Jarred Land, REDUser.net 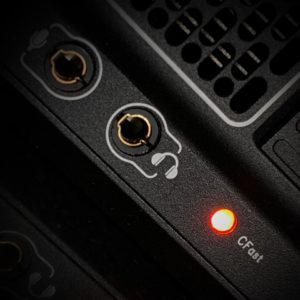 Taking to the REDUserForums last week, Land dispelled a few rumors about an image for RED’s next camera that supported CFast. Many were wondering if this new camera would replace an older model, like the lower cost RED RAVEN, or be something entirely new.

Displaying a close up of the nameplate that boldly proclaims the new camera KOMODO, Land also went about to let the RED faithful know, not necessarily what the camera is, but more about what it isn’t. Here’s what he said:

So, it’s clear that Komodo isn’t a replacement camera for anything, and that it’s more open source, using CFast cards It’s also going to cost more than $5,000, unless you own a Hydrogen. That’s key because it hints that this could be the first camera that relies on Hydrogen to manage it’s imaging workflow.

Without an HDMI port, that sounds like Hydrogen will do double duty as the monitor, and with no XLR ports it’ll likely have a a smaller 3.5mm mic port. It would have to with a size no larger than 4 inches in any direction and weighing less than 2 pounds.

Or, it could just be a dedicated, small form camera like Blackmagic did with the square Micro Cinema Camera, that could be used in compact locations or even with remote control. But the downside is, that Land says that KOMODO won’t be under $5,000, and Blackmagic’s MCC is under $1,000. Or, it could be a competitor for the Blackmagic Pocket Cinema Camera, but even that is a tall order for around $1400.

There’s a lot of unknowns here, but Land says that KOMODO is being tested out in the wild, so we should know sooner rather than later.

RED Caught Up in MiniMag Controversy

Hard drive sizes. It’s a strange mix of actual storage space and traditional marketing.That’s usually because they do some fancy math to state that a drive has a capacity of, say 512GB, which they arrive […]

By James DeRuvo (doddleNEWS) Not long after NAB 2016, RED announced they wouldn’t have a booth at the confab in 2017, instead choosing to stay local for Cine Gear. For the cinema camera company, it’s quite […]