UPDATE #2: Canon is planning an official announcement on September 5, 2018 (EST). Could this be their new Full Frame Mirrorless camera? Canon Rumors has reversed itself, based on talks with their insider sources, and now thing they could.  But it may not be the camera we’re expecting.

UPDATE: With the hype that Nikon is generating with their breadcrumb strategy before Photokina, CanonRumors is reporting that Canon will ceed the field to Nikon at the Photo confab for any announcement they have planned, choosing instead to wait until 2019 to make their own official announcement. CES perhaps? NAB?

Canon is set to take the next step in their new focus on mirrorless cameras with the launch M5 Mk. II The first step came with the M50 last February, and as we work towards full frame cameras next year, it makes sense that Canon will want to announce the M5 Mk. II, and do it  before Photokina in September.

It seems like everything is unfolding as we have come to expect, with the mirrorless M5 Mk. II to be the next in Canon’s mirrorless initiative. And according to the word on the street, the M5 Mk. II will get a modest sensor bump to 28MP, and will bring 4K video to the party. FINALLY! Canon is also redesigning the menu interface,  and will toss in an upgraded DIGIC 8 processor.

Other than that, we won’t know more about specs, but we can divine some by looking at the Mk. I M5, which also came with the following: 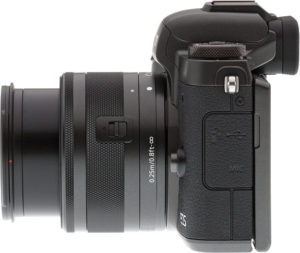 I’m guessing that while it will shoot 4K, we may have to wait another generation for it to shoot in 60p. I’m also hoping that Canon will have improved on the M5s below average battery life and after five years of development, the M5II will enjoy a wider range of EF-M lenses to choose from.

Meanwhile that’s all we’ll get until probably next month. It’s ten weeks u til Photokina in September (man, this year is simply flying by!) and the talk is that the EOS M5 Mk. II will be announced ahead of that, so that Canon can showcase it at the annual camera confab in Cologne, Germany.

But this isn’t one of the rumored Full Frame mirrorless cameras that we’re expecting to come down the line in 2019. We’re guessing though, that like the M50 before it, the M5 Mk. II will give Canon the opportunity to start chipping away at market share in the mirrorless category, and then make a huge splash in 2019 with their higher end prosumer mirrorless designs.

So, would you get your feet wet on the M5 Mk. II before we officially know about the full frame offerings next year? It could be a good way to make a switch to mirrorless, so that once those higher end models some, you already have your lenses bought, and the crop factors all figured out. Then, you’d have a B camera as well.

In other mirrorless news, Nikon has announced that it is discontinuing the under performing N1 series mirrorless camera, and analysts indicate that this is so that Nikon can take the talent and resources devoted to that line and put it towards their upcoming pair of full frame models. We’ll know more about them next Spring.

Looking at the new DJI OSMO Action camera, I think I have the answer to my question of what would happen if Apple’s Jony Ive was moonlighting on Apple with DJI. The result is a […]

By James DeRuvo (doddleNEWS) JVC’s latest 4K professional video camera is looking to be a one stop TV studio, but offering built in integrated graphics and live streaming. Will citizen journalism take it to the […]