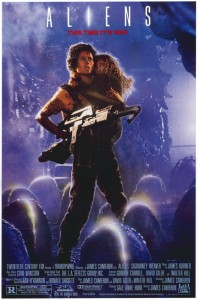 Thirty years ago James Cameron’s Aliens was released to the world – solidifying his status as the new king of the blockbuster world.

As an R-rated action sequel to Ridley Scott’s already revered 1979 horror-thriller, it cannot be overstated how much of a remarkable achievement Aliens was and still remains.

Cameron took the dark and moody world which Scott created and injected it with energy and charisma, creating one of the best popcorn movies ever made.

While studio 20th Century Fox initially wanted to create a follow-up to the original quickly, a management shift at the company meant their was a seven year gap between the two films.

Cameron used this to this advantage in storytelling, spacing the films 57 years apart placing Sigourney Weaver’s character Ellen Ripley in hypersleep. When she awakes much of the world she has known has changed, and we learn of her employer Weyland-Yutani Corporation’s intentions along with her.

Set in 2179, the story centers on Ripley, the sole survivor of the massacre onboard the cargo ship Nostromo. At the start of the sequel, Weyland-Yutani Corporation decides to send a unit of marines to planet LV-426, where the alien eggs were discovered in the first film, which is now home to a terraforming colony.

Ripley agrees to join the mission as a consultant on the promise that the terrifying xemomorph monsters will be destroyed and not collected and studied. Of course, once the motley band of colonial marines touch down on the planet, all hell breaks loose.

Cameron’s script for Terminator (1984) was high regarded in Hollywood and he was tasked with writing ‘Alien II’ on the strength of that. Following the success of the Arnold Schwarzenegger techno-horror, which was similar in many ways to Scott’s Alien – Fox hired Cameron to helm the sequel giving him a $18 million budget to play with.

It’s actually important to note that, at the time, this wasn’t a huge outlay for a popcorn movie. In comparison, Richard Donner’s Superman (1978) had a $55 million budget eight years before, and Return of the Jedi (1983) had a sizeable $42.7 million spent on it three years prior. Also, Ridley Scott had $11 million to play with in 1979 for the first movie, which, taking inflation into consideration, is roughly the same as what Cameron had.

Sigourney Weaver reportedly held out for a $1 million fee to reprise her role as Ripley, something which initially irked the studio, who thankfully relented. The fact that the actress reprised her role in the lead is arguably the single biggest reason, aside from Cameron’s daring genius, that the film was such a triumph.

In Scott’s film Ripley is a smart, strong survivor with little backstory. Cameron managed to develop the character beautifully, showing her as a mother who had lost her child – through her relationship with orphan Newt who is the lone colony survivor on LV-426 – which is one of the strongest elements of the movie.

Aliens is arguably the best example of a sequel which did not try to replicate the original, and is almost completely different in tone and style. While the first film is a horror-thriller, the sequel is a thrilling action blockbuster. Cameron has spoken of using the Vietnam War – which he learned about while writing the screenplay for Rambo: First Blood Part II (1985) – as an analogy and the results are clearly evident. A crew of overly-confident young soldiers are thrust into a conflict where they are ripped apart by an unknown foreign advisory.

Another defining part of the film are the performances of the supporting cast, including Michael Biehn as Corporal Dwayne Hicks, Paul Reiser as the duplicitous Carter J. Burke, Bill Paxton as Private Hudson and Lance Henriksen as android Bishop. Both Biehn and Paxton appeared in Cameron’s Terminator two years prior.

Aside from the Vietnam War, Cameron’s other biggest influence was Robert A. Heinlein’s novel Starship Troopers – which was eventually adapted by Paul Verhoeven in 1997 – which the actors playing the marines were told to read.

Largely filmed at London’s Acton Lane Power Station and the famous Pinewood Studios, Aliens was a huge commercial success in 1986, grossing $183.3 million worldwide and was also critically lauded. The violent blockbuster was nominated for seven Oscars – winning two for Sound Effects Editing and Visual Effects – including a nomination for Weaver’s tour-de-force in the lead. The fact that the actress was recognized for her role in a science-fiction movie was testament to her powerful performance and Cameron’s imagination.

The current state of mainstream cinema, with its grossly overinflated budgets and watered-down comic-book adaptations, means movies like Aliens are a thing of the past. Cameron was operating in that sweet spot in cinematic history where the industry was transitioning from the 1970s auteur period, to the domination of family-friendly blockbusters (how many R-Rated action movies have come out in recent years?). A bit like ancient buildings such as the Roman Coliseum or India’s Taj Mahal – too expensive and risky to replicate now – uncompromising adult cinema will forever be marvelled as a bygone age where artists were encouraged to take risks.